US President Barack Obama’s recent visit to Saudi Arabia confirms what many even causal political observers have begun to suspect regarding recent US political history, that Washington’s values aren’t just nonpartisan, driven entirely by special interests permeating both sides of the political aisle, but are altogether non-existent. To understand why requires an understanding of both US-Saudi relations, not just during the Obama administration, but over the past several decades, as well as a basic understanding of Saudi Arabia itself.

Despite the integral role Saudi Arabia plays in US foreign policy, particularly but not limited to the Middle East, many know very little regarding this nation. American, British, and European media intentionally serve up disjointed reports regarding the internal affairs of the Kingdom of Saudi Arabia. Should ever a complete picture be given to global audiences and the same amount of attention given to the shortcomings of Saudi Arabia as is given toward the perceived enemies of the Western world, clear limitations would be demanded by the public in regards to their respective governments’ relationship with the Saudis until badly needed reform was undertaken.

Saudi Arabia: By Western Standards, a Nation In Need of Reform

Even the name of Saudi Arabia itself is problematic. It is literally named after the family that has ruled it, uncontested, for decades, the House of Saud. Thus, Saudi Arabia means, “Arabia of the Sauds.” The House of Saud rules the majority of the Arabian Peninsula under one of the last remaining absolute monarchs on Earth. Elections are held, but only for local administrative posts, and even then, half of the population is disenfranchised, as women are entirely barred from voting. In addition to this, women are subjected to a ban on driving and other restrictions based solely on their sex.

Women are not the only victims of the House of Saud’s brand of governance. Those accused of apostasy, adultery, witchcraft and sorcery, homosexuality, and of course the House of Saud’s political opponents (charged for treason, sedition, or terrorism) face public execution by sword in a place known as “chop-chop square.” Short of execution, prisoners may also be flogged for their alleged misdeeds.

The overall perspective of Saudi Arabia, as seen through the lens of the West’s impressive number of prominent human rights organizations is abysmal. The World Economic Forum’s 2013 Global Gender Gap Report (PDF) ranks Saudi Arabia as 127 out of 136 nations in terms of gender parity. Freedom House’s 2014 “Freedom in the World” report (PDF) lists Saudi Arabia as “not free,” while Human Rights Watch’s 2013 World Report (PDF) alleges that Saudi Arabia has suppressed or failed to protect the rights of 9 million Saudi women and girls and 9 million foreign workers. The report also cites thousands of unfair trials and arbitrary detentions.

Based on the given pretexts the Western World has used to justify a belligerent foreign policy toward other nations, it would appear that Saudi Arabia is a suitable candidate to likewise be subjected to sanctions, internal political meddling, and open calls for regime change. Yet for some reason, it most certainly is not. Instead, it is clearly protected by media self-censorship and diplomatic double standards across the West.

While the US recently closed Syria’s embassy in Washington and ordered Syrian diplomats out of the country claiming, “it is unacceptable for individuals appointed by that regime to conduct diplomatic or consular operations in the United States,” the US gladly continues its close relationship with Saudi Arabia. This is even after revelations have come to light that the Saudis have been funding and arming terrorists listed as such by the very US State Department that shuttered the Syrian embassy in D.C. 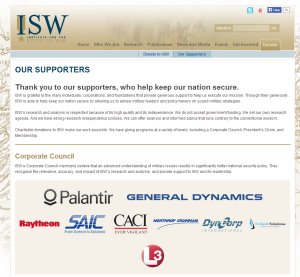 Reuters had reported the creation of the Jaysh al-Islam (Army of Islam) in its article, Insight: Saudi Arabia boosts Salafist rivals to al Qaeda in Syria, however, while it mentions Liwa al-Islam as one of the founding members of the new front funded and armed by Saudi Arabia, it fails to mention that Liwa al-Islam has been documented to regularly coordinate with Jabhat al-Nusra, an internationally designated terrorist organization with direct ties to al-Qaeda.

Confirming this is the US “Institute for the Study of War” headed by many of America’s foreign policy architects and backed by the West’s most prominent arms dealers, in its 2013 “Middle East Security Report 9: The Free Syrian Army” (PDF) stated specifically that, “Liwa al-Islam is known to cooperate with Jabhat Nusra and conduct joint operations,” and that “Jabhat Nusra is the most prominent Salafi-jihadist organization in Syria and is associated with al-Qaeda in Iraq (AQI). Due to the overlap in leadership structures between AQI and Jabhat Nusra, the organization was designated a foreign Terrorist Organization by the United States on December 10, 2012 as an alias for AQI.”

Surely then it should be unacceptable for individuals appointed by a government funding global terrorism to conduct diplomatic or consular operations in the United States. But for Saudi Arabia, apparently an exception to the rules has been made and it is an exception that has transcended multiple US Presidential administrations from George Bush Sr. all the way to the current US President, Barack H. Obama.

In defense of criticism of Saudi Arabia’s human rights record, the Saudi Deputy Premier, Crown Prince Abdullah bin Abdul Aziz, told the U.N. Third Millennium summit in New York that ”it is absurd to impose on an individual or a society rights that are alien to its beliefs or principles. He continued by warning of, “the ramifications of unbridled globalization and its use as an umbrella to violate the sovereignty of states and interfere with their internal affairs under a variety of pretexts, especially from the angle of human rights.”

While Saudi’s Crown Prince may have a valid argument to make, his own nation’s foreign policy is evidently equally “absurd.” The very justification used by the Saudis to interfere in Syria by funding and arming fighters in a bid to overthrow the current Syrian government has been its own desire to impose upon the Syrian people an opposition it finds favorable to its foreign policy and regional ambitions. It is clear that for Saudi Arabia, it is not principles that drives its policy, but rather its policy that selectively uses “principles” as convenient veils to hide behind.

America’s relationship with Saudi Arabia is no different. The principles America promotes are but a façade that are selectively applied only when convenient, and abandoned altogether when they serve as an obstruction.

The London Guardian in its article, “Obama lands in Saudi Arabia to help soothe relations with key ally,” portrays US-Saudi relations as tense after growing concern in Riyadh over the US’ alleged attempts at rapprochement with Iran regarding its nuclear program and Saudi disappointment over what the Guardian claims was “Obama’s decision to hold back from using military force against Syria” regarding “its use of chemical weapons.”

Perhaps the Guardian believes readers have forgotten the attempted rush to war by the United States in the immediate aftermath of the chemical attacks in August of 2013 before any evidence was presented to the public. The only obstruction to US military intervention in Syria was not in the White House, but from a war-weary distrustful American public with doubts still lingering over them after similar claims were made before the invasion of Iraq. Both the Guardian’s narrative and the statements made by both the United States and Saudi Arabia appear solely for public consumption with the only exception being that the trip served as a reiteration of “the significance Washington placed on its “strong” ties with the world’s largest oil exporter.”

Obama’s trip, and the theater that accompanied it, was more a dressing for the joint failure of US-Saudi foreign policy in regards to both Syria and Iran. It was an attempt to reset the public narrative while doubling down on covert support for fighters in Syria and attempts to encircle and undermine Iran further. While assurances of America’s commitment to resolving the Syrian conflict are build on a foundation of alleged “human rights” concerns, the “promotion of democracy” and “freedom,” their strongest and most willing regional partner, Saudi Arabia is a land itself devoid of such concerns.

It is clear that principles drive neither America’s nor Saudi Arabia’s involvement in Syria, but rather self-serving geopolitical interests centered on both power and wealth.

Saudi Arabia’s role as the “world’s largest oil exporter” is only one contributing factor to America’s bottomless hypocrisy regarding its relations with the Saudi Kingdom. While some would see US policy dictated by Saudi wealth, it is the regime’s precarious political existence both domestically and internationally, a key feature desired by hegemons when searching for vassal states, that primarily dictates US-Saudi relations. Saudi Arabia’s very existence depends on America’s continued support in terms of economics, defense, and even how the nation is perceived globally. While the West currently shelters Saudi Arabia from the international scrutiny it deserves, this can be changed at any time.

For the Saudis, to continue along this path is dangerous indeed, particularly as their American guarantor’s global influence begins to visibly wane. While it is easy for the current enemies of Saudi Arabia to undermine its stability by exposing the seemingly medieval society it presides over, (the potential exposure of it used by the West as perpetual blackmail) offering the autocratic regime a path toward reform and rapprochement might be more strategically sound. Likewise, Saudi Arabia’s acceptance of that path would appear to be of particularly sounder long-term planning.

Just as was the case with many of America’s other “allies” in the past, Saudi Arabia is a dictatorship awaiting its eventual dagger in the back. It must begin making preparations both for finding new allies, and for the eventual plunge of that dagger, a plunge continued obedience and collusion will only postpone at best.