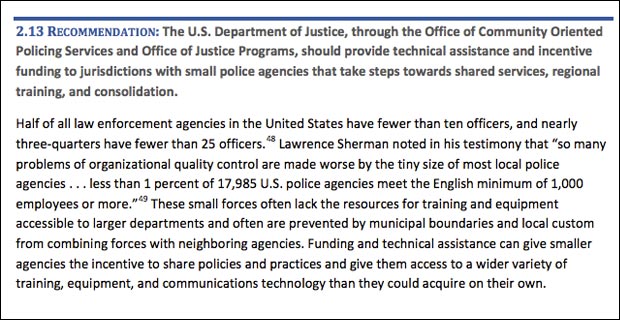 The Obama administration released a plan to expand federal control over state and local law enforcement.

The plan released Monday, entitled Task Force on 21st Century Policing, advocates the federalization of police agencies across the country by forcing them to adhere to stricter requirements when they receive federal funding.

“The U.S. Department of Justice, through the Office of Community Oriented Policing Services [COPS] and Office of Justice Programs, should provide technical assistance and incentive funding to jurisdictions with small police agencies that take steps towards shared services, regional training, and consolidation,” one of the numerous recommendations in the plan stated.

The plan also calls for the feds to collect more law enforcement data.

“…There is a lack of uniformity in data collection throughout law enforcement, and only patchwork methods of near real-time information sharing exist,” the plan stated in a section advocating “national standards” for law enforcement technologies. “These problems are especially critical in light of the threats from terrorism and cybercrime.” 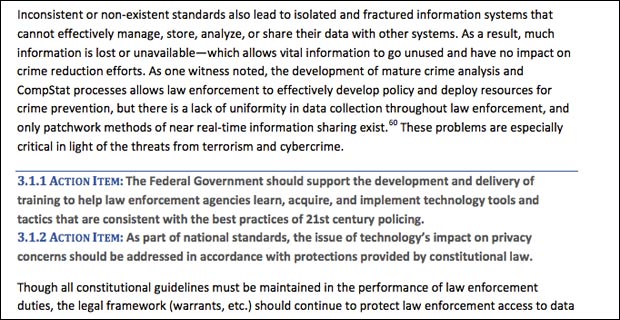 President Obama said that most of the plan’s recommendations “are directed at the 18,000 law enforcement jurisdictions that are out there.”

“I’m going to be asking Eric Holder and the Justice Department and his successor to go through all these recommendations so that we can start implementing them,” he said Monday. “I know that one area that’s going to be of great interest is whether we can expand the COPS program that in the past has been very effective, continues to be effective, but is largely underfunded — to see if we can get more incentives for local communities to apply some of the best practices and lessons that are embodied in this report.”

“But a lot of our work is going to involve local police chiefs, local elected officials, states recognizing that the moment is now for us to make these changes.”

The plan follows the same strategy laid out by Common Core: expand federal power on the state and local level by adding more conditions to federal funding.