All indicators point to the sober realization that those ironclad seams that bound the Democratic establishment together four years ago are coming apart.

Originally hired as the President’s chief legalese attack dog, and of good Chicago pedigree, Attorney General Eric Holder has done nearly everything humanly possible to bend laws in an effort to shield the President from any legal blow-back from an endless array of unconstitutional and criminal acts undertaken committed since 2008 and before.

This past Wednesday, the first major leak sprang in a White House ship that was thought to be unsinkable when Obama began his occupation of Pennsylvania Ave four years ago. In the Nixonian tradition, and a move that was clearly part of an overall damage control operation, the President claimed dubious legal refuge under ‘executive privilege’ regarding any documents relating to Attorney General Eric Holder’s notorious “Operation Fast and Furious”. 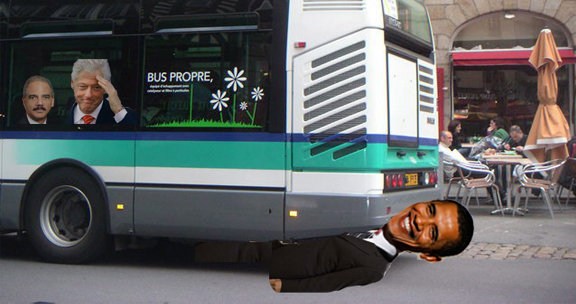 Opponents of the Obama White House will likely use this scandal as ammunition during the coming months. Democratic spin doctors behind the scenes are already losing their footing as to how to defend against Republican attacks during the this re-election campaign.

To make matters worse, following Mitt Romney’s appearance at the Bilderberg Meeting in Chantilly, Virginia on May 31 – June 2, 2012, speculation is abound that the globalist steering committee were auditioning the new GOP front man, who by all apparent reports, had a successful debutant ‘coming out’ in front of Bilderberg in the run-up to this November’s US Presidential election. This could mean they are preparing to ditch the scandal-ridden Obama White House – now seen as a liability in achieving their future plans for a one world government.

In addition, Obama’s absence from Rio+20, the annual globalist conference sponsored by the United Nation in Brazil this week, also indicates that he may be phased out of the globalist elite.

Support is also being subtly pulled away from the White House, as top level Democrats have begun subtly weighing in against Obama.

Obama’s reaction to the recent ‘White House leaks’ demonstrated that the rug is being pulled out from under him. He called in support from Diane Feinstein, Democratic Chair of the Senate Intelligence, and others, but the fact remains that embarrassing inside info has been leaks from his own inner circle at a key time in the election cycle. Obama angrily denied that his White House team was the source of national security leaks about alleged terrorist “kill lists,” and his Tuesday evening drone hit-list sessions, or his government’s cyber attacks against Iran’s nuclear program. Denials cannot patch the leaks though.

On June 1st, Democratic icon and globalist figure Bill Clinton tacitly endorsed Mitt Romney during a CNN report, saying that ‘Romney’s business career is an asset,’ and with his term as governor, he’s qualified to be president. In this way, Clinton’s remarks were overwhelmingly positive towards Romney, in effect, comparing Romney’s qualifications to Obama’s in those areas. In addition to this, Clinton distanced himself from President Obama’s economic policies on June 6th, publicly stating that he thinks Congress should keep the Bush Tax Cuts in force. This type of rhetoric would have been unheard of four years ago, hinting that Democratic solidarity may be over.

Too Many Scandals Abound

Democrat scandals have been numerous, and severe in nature. The concept of cronyism was embraced by the Obama White House from day one, and with an enthusiasm that almost made the previous Republican stint in the White House look shy in comparison.

First came Obama’s Solargate debacle, where favored green subsidy hole Solyndra managed to burn through half a billion in federal money without producing anything and eventually filing for bankruptcy.  There’s also the matter of George Kaiser, friend of Obama and Oklahoma billionaire, and a major investor in Solyndra – who also happened to be a key ‘bundler’ for Obama’s 2008 election campaign. Kaiser cashed out of Solyndra weeks before it went down.

This was followed by Nancy Pelosi’s own brother-in-law landing a $737 million loan guarantee from the Department of Energy for another federally subsidized boondoggle – the Solar Reserve project.

Judiciary branch problems have also plagued the White House this year. Obama’s own Justice Elena Kagan was forced to recuse herself from the Supreme Court hearing over DOJ vs. Arizona regarding the state’s SB 1070 immigration reform law. As a result, the court leaned in favor of Arizona.

And then there’s The Affordable Care Act, aka Obamacare, the crown jewel of the administration’s socialist legacy. Numerous states have rallied against its implementation on the grounds that the federal mandate is not only unconstitutional, but an attack on their state sovereignty. Early Supreme Court motions on the matter have appeared to favor states on the matter, a result which has angered the President to the point where he accused the Executive Branch as being “an unelected group of people” who were out to kill the Democrat Party’s main political Pièce de Résistance in Obamacare. Many a constitutional scholar were left with their jaws hanging near their ankles following Obama’s press conference on the White House lawn that day.

In addition to this, the now compromised Eric Holder and his DOJ are currently juggling federal lawsuits against some 30 states, either over problems with implementing Obamacare, or over states wanting their own immigration reforms. Now that Holder is inches away from having his political career flushed down the golden loo, all these excessive DOJ actions could cause a very serious backlash for Obama and his inner circle, who has steadfastly stood by Holder.

Remember that Holder’s very first piece of dirty work for the President was Executive Order 13489, signed on Obama’s first day on the job – on the 21st of January 2009. Indeed, the first order of business was to invoke his new found executive privilege in order to seal any of his personal records  – mostly notably, records which might affect his eligibility to hold the federal office of US President. That particular dictatory cover-up by Obama still continues to this day.

Many have accused the President of becoming a dictator, as he has advanced much of the very same agenda and has used the very same tools as his predecessor George W. Bush – further consolidating power into the executive branch of the federal government.

Obama’s own birth certificate and social security forgery cases are naturally linked to this first executive order, but for the most part, the mainstream media has been decidedly hands off when it comes to challenging the President on his credentials for the office of President.

The fumbling of Fast and Furious is – on its own, one prime example of the White House’s inability to run a covert op against the American people without being caught out in full public view. This would certainly be construed as a black mark against Obama’s cadre and their ability to serve at the pleasure of North American and European elites.

In other words, they may be asked to leave Pennsylvania Ave by the bond holders represented by those attending Bilderberg.

That is why globalists who are within the Democratic Party may have no choice but to throw Obama under the bus, and regroup for the next elections.

When the media begin to distance themselves from Obama, then you know that it’s lights out for a second term and that he will join Jimmy Carter as a fabled ‘one termer’.