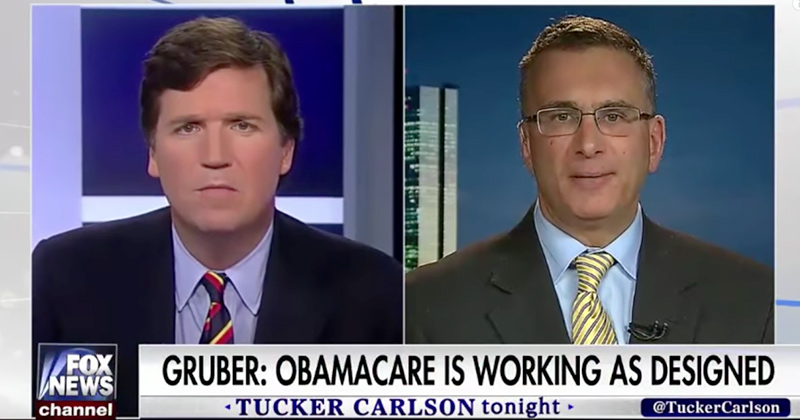 Tucker Carlson of Fox News hosted a segment with Obamacare architect Jonathan Gruber in which the MIT professor claimed the law was “never supposed to help everybody.”

A few years ago Gruber was called out for crediting a “lack of transparency” and the “stupidity of the American voter” as the reasons Congress passed Obamacare.

The professor defended the law by claiming that the richest, youngest and healthiest Americans may have been hurt by the law, but the rise in their healthcare premiums has helped lower costs for less fortunate demographics.

Carlson responded by saying, “You said there are healthy people who are paying more, and thank you for conceding that, but I wonder why they shouldn’t be annoyed that they have to pay for services they don’t want or need. Why should I be forced to buy a plan that offers things that don’t pertain to me in any way?”

Gruber replied, “That’s a trivial part of the issue.”

To reiterate, Carlson asked, “Last simple question, I’ll keep it super simple. Why should I be required to buy a plan that covers things that do not apply and will never apply to me such as breast feeding, prenatal care, substance abuse counseling. Those are things that will never apply to me as a non-drinking man. Why should I have to buy those plans?”

Jonathan said, “That’s a legitimate debate to have, but rather than have a legitimate debate you villainize the major accomplishment of the law which is to end the discrimination insurance markets… if you think the law benefits are too generous and that’s the part of the law you don’t like, fine, but it’s no excuse to rip the whole law down.”

Tucker finished out the segment by saying, “Don’t call them benefits because they’re not. If I don’t want to buy it, I don’t care to have it, therefore it’s not a benefit. So I’m not arguing that it’s too generous, I’m arguing that it’s stupid for my uses.”