Corker’s critics have criticized him for his hypocrisy, producing evidence Corker himself profited from a strategy to short Fannie and Freddie in 2007 and 2008, while maintaing an investment portfolio that has invested as much as $50 million in the same hedge funds Corker attacks as “vultures” corrupting Washington.”

As Infowars.com has previously reported, in 2006, Henry Luken, a long-time Corker business associate and political backer, acquired from the then-Chattanooga mayor Bob Corker tens of millions of dollars in risky real estate holdings that were headed underwater, providing Corker the capital he needed to complete his successful run for the Senate. 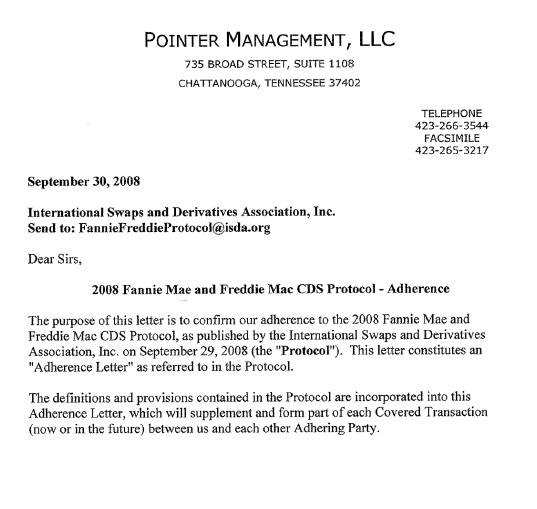 After lending his campaign $4.2 million from the Luken transaction into his Senate campaign, giving Corker virtually all the money he spent in the final weeks of the campaign, Corker narrowly defeated his Democratic challenger Harold E. Ford, Jr., 51 percent to 48 percent, outspending Ford by $18.6 million to $15.6 million.

According to his Senate financial disclosures, upon his arrival in the Senate ,, Corker began using the proceeds from the Luken transaction to shift tens of millions of dollars to a series of hedge funds, including Chattanooga-based Pointer Management Company, whose founder, Thorpe McKenzie, was a political supporter of Corker and an investor in Luken’s companies.

Infowars.com has obtained a copy of a compliance “Adherence Letter” authored by Pointer Management, LLC, dated September 30, 2008, making it clear Pointer was taking a short position on Fannie Mae and Freddie Mac by buying derivatives, specifically credit default swaps, that would generate for Pointer a handsome profit, provided the share prices of the two GSEs went down. 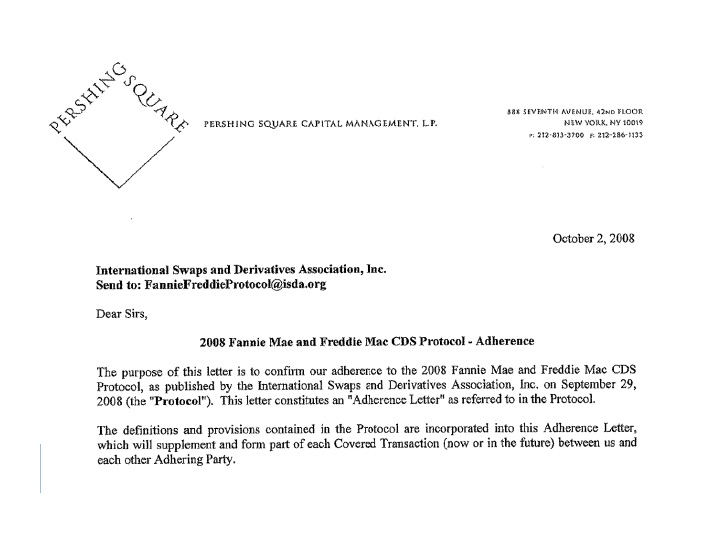 This was the same period when investor Bill Ackman, the CEO of the now multi-billion-dollar Pershing Square Capital Management hedge fund, was also shorting Fannie and Freddie by purchasing credit default swaps, as evidenced by a letter dated Oct. 2, 2008.

Infowars.com has possession of two emails obtained by FOIA requests that document Sen. Corker had meetings with Jim Lockhart, then the director of the Office of Federal Housing Enterprise Oversight (OFHEO), the precursor to the Federal Housing Finance Agency FHFA, in April 2008 and again in July 2008, prior to the Pointer purchase of Fannie/Freddie credit default swaps.

In the first email, dated April 8, 2008, Courtney Geduldig in Corker’s Senate office, emailed to Joanne Hanley, Congressional Affairs, OFHEA, with a copy to Peter Brereton, External Affairs, OFHEA, asking how best to “follow-up on a meeting with the Senator (Corker) and the Director (Lockhart).

The second email, dated July 10, 2008, was again from Courtney Geduldig to Joanne Hanley, with a copy to Peter Brereton, stating: “Obviously, there’s a lot going on in your world.  The senator (Corker) wanted to see if someone could come in and talk to us about the new accounting proposals as well as the gse’s current situation.  Let me know what might work.”

It seems highly likely that material, non-public information was exchanged during these two meetings that took place 5 months and 2 months respectively before the GSEs were put into conservatorship.

Corker’s Senate financial disclosures indicate that after his successful 2006 Senate campaign, Corker invested between $8.5 million into hedge funds, including between $5 million and $25 million that he invested in Pointer.  Corker’s Pointer investment profited him a total of between 3.9 million and $15.5 million over the next nine years.

Corker’s own investments in hedge funds betting on Fannie and Freddie’s failure provide a damning context for his crusade against the GSEs and their investors.  Corker appears to have even enlisted members of the press in his campaign against the GSEs.

On Aug. 10, 2015, the Business Insider published an article noting that in a conference call with investors, Bill Ackman, an investor in Fannie and Freddie, attacked John Carney, a reporter at that time writing for the Wall Street Journal, for writing the “most factually inaccurate” and “frankly embarrassing articles about Freddie and Fannie, calling Carney’s coverage of Fannie and Freddie in the newspaper’s “Heard on the Street” column a “disaster.”

Ackman’s frustration was that Carney had argued the shares of Fannie and Freddie were not “living up to hopes,” without understanding the reason for that underperformance was the Net Wort Sweep, in which Treasury since August 2012 had begun stripping from Fannie and Freddie all earnings, without allowing either GSE to recapitalize or to pay dividends.

In the various jobs he has held in his writing career, Carney has consistently supported Corker by attacking investors that invested in Fannie and Freddie while supporting legislation Corker introduced with Virginia Democratic Sen. Mark Warner in 2013 aimed at shutting Fannie and Freddie down. Corker’s legislation favored a “bank-centric” mortgage finance model, where banks that have financed Corker, including Wells Fargo, could be expected to be dominant players in the future housing finance industry.

Before starting his latest assignment with Breitbart.com, Corker media stooge John Carney even took pains to disguise his years of publishing articles bashing Donald Trump, going so far as to erase from his Twitter archive dozens of tweets he had published critical of Trump’s 2016 presidential campaign.

In a article he wrote for DealBreaker, dated April 10, 2006, Carney ridiculed Trump’s performance at a press conference held at Trump Tower in New York City at which Trump announced the creation of Trump Mortgage.

Commenting that Trump seemed “confused by the crowds and media” as he assumed the podium, Carney asked Trump, “Will the homes bought with Trump mortgages have to be adorned with giant gold letters reading Trump?” – a question that got no response, as Trump turned away, with Carney reporting Trump’s hair scowled back at him.

In his most recent article, written for Breitbart.com on April 7, 2017, Carney continued his attack on “hedge funds and other big investors, including Perry Capital LLC and Fairholme Funds” for not understanding Fannie and Freddie were, in Carney’s opinion, “the primary cause of the financial crisis” in 2008 – an argument Carney asserted without considering the role played by major bank players in the crisis caused securitizing sub-prime mortgages.

The truth is that the crisis began when mortgage loan originators like Countrywide Financial and financial institutions like Washington Mutual began marketing sub-prime mortgage loans aggressively well before Fannie and Freddie got in trouble.

By the time Fannie and Freddie were seized in the fall of 2008, more than 311 major lenders more than 311 major lenders in the sub-prime mortgage market had failed, including financial institutions that provided warehouse lines of credit to independent lenders with the goal of originating increasing lower quality mortgage loans in the sub-prime market.

The widely read financial blog ZeroHedge.com on Feb. 2, 2010, took Corker to task for his “bank-centric” view that no commercial bank had failed while performing proprietary trading, arguing that Corker “must have received his information from the banking lobby, and did not do his own homework.”

An article published in Time Magazine on Feb. 5, 2010, made clear that Lehman Brothers had lost more than $32 billion from proprietary trading and principal transactions in the mortgage market in the year and a half up to the crash that occurred in the fall of 2008 – a sum nearly double the $18 billion in common equity Lehman Brothers had in late 2006, just before mortgage bonds began going south – a sum Time called “more than enough to wipe the firm out.”

The Time article further pointed out Merrill Lynch lost nearly $20 billion on investments in collateralized debt obligations in the mortgage market, while Morgan Stanly experienced nearly a $4 billion loss in proprietary mortgage-securities related trading in the fourth quarter of 2007 alone.

Time went on to note Goldman Sachs spent $3 billion to bail out one of its hedge funds, and Citicorp poured out more than $3 billion into fixing its problems with structured investment vehicles that it had set up with its own capital.

“Like Merrill, Citibank lost big — as much as $15 billion, on the CDOs [Collateralized Debt Obligations] it decided to hold rather than sell off,” Time concluded. “In fact, nearly every large financial firm that stumbled during the financial crisis had billions of dollars in proprietary-trading or hedge-fund losses.”

ZeroHedge.com referenced an article published by the Wall Street Journal on Sept. 26, 2008, noting Washington Mutual was seized by the FDIC and sold off to J.P. Morgan Chase in the largest failure in U.S. banking history, resulting from the bank’s extensive involvement aggressively originating mortgages in the sub-prime mortgage market, as well as buying sub-prime loans from outside mortgage lenders, and participating as a major player in the secondary securitized CMO, or collateralized mortgage obligation, market.

Joshua Rosner, a managing director of the New York-based independent research firm Graham Fisher & Co., an expert in mortgage financing, in an exclusive email exchange with Infowars.com, commented on Corker’s apparent hypocrisy investing heavily in hedge funds, including one known to have shorted Fannie and Freddie in 2008, while demonizing hedge funds for wanting to make a profit on their GSE stock.

“The hedge fund attacks are a sideshow to avoid scrutiny of Corker’s own proposals, which would turn over the U.S. housing market to Wells Fargo,” Rosner said.

“Corker has this amazing way of creating false villains to avoid the substance of real mortgage market reform,” Rosner continued.

“Making the argument all about ‘evil hedge funds’ captures the public attention and may sound right to those less knowledgeable about the importance of capital investment to the growth and development of the mortgage market in the United States,” he insisted.

“But the truth is that demonizing hedge funds is nothing more than a disingenuous and cynical claim by Corker – a legislator with a long history of too-close ties to too-big-to-fail (TBTF) institutions,” Rosner said in conclusion.