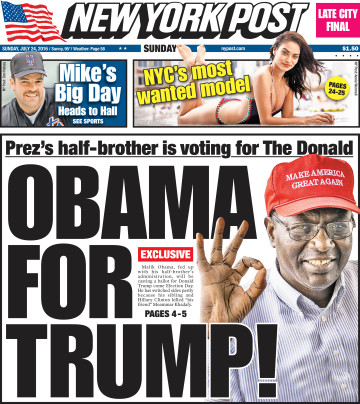 President Barack Obama’s half brother, Malik Obama, says he will be voting for Donald Trump in the upcoming 2016 US election.

Malik recently told the New York Post he was inspired by Donald Trump’s message and his tell-it-like-it-is attitude.

“I like Donald Trump because he speaks from the heart,” Malik told The Post. “Make America Great Again is a great slogan. I would like to meet him.”

Malik, who proudly wears a Trump hat, is a resident of Kenya, but plans a trip to Maryland – where he is a registered voter – in November to cast his vote for Trump.

“Mr. Trump is providing something new and something fresh,” he said.

Expressing “deep disappointment” with his brother’s administration, Malik said Hillary Clinton’s mishandling of classified and top secret information was just one factor pushing him towards Trump.

“She should have known better as the custodian of classified information,” Malik said.

Clinton’s role – along with his brother’s – in the violent ousting of Libyan leader Muammar Gaddafi, “whom [Malik] called one of his best friends,” according to the Post, was another reason he disliked Hillary.

“I still feel that getting rid of Khadafy didn’t make things any better in Libya,” he said. “My brother and the secretary of state disappointed me in that regard.”

Malik additionally revealed his motivation to switch to the GOP was also rooted in their opposition to same-sex marriage.

“I feel like a Republican now because they don’t stand for same-sex marriage, and that appeals to me,” Malik said.

Malik recently made headlines when Fox News aired images from his wedding showing President Obama, wearing a traditional Muslim dress, as his best man, but he says he’d prefer to stay out of the spotlight.

“Honestly, I’ll be happy when my brother is out of office, and I will finally be out of the limelight and be able to live like a human being.”