Since 2007,  these questions have remained largely unanswered, not least because the White House’s legal team has gone to great lengths  and costs to seal all documents related to the President’s identity. The result of this – is a nation gradually tearing apart at the seams.

Arizona is currently leading a multi-state, head-on charge towards this issue with a bill requiring the president to prove he qualifies for office.  Arizona’s Maricopa County Sheriff’s  Office has mounted the only official law enforcement effort to date that has dared  to investigate the President’s presented credentials –asking the burning question: has there been forgery or fraud committed by, or on behalf of the President?

In a famous passage from Aesop’s Fables, it tells a story of a slave named Androcles who was wandering through the forest when he came upon a Lion lying down moaning and in pain. At first he turned to flee, but finding that the Lion did not pursue him, he turned back and went up to him. As he came near, the Lion put out his paw, which was swollen and bleeding. Androcles found a huge thorn, causing all the pain. He pulled out the thorn and bound up the paw of the Lion, who was soon able to rise and lick the hand of Androcles like a dog.

From a consensus reality perspective, the prevailing mainstream media interpretation of this fable might portray President Obama and his Federal government in the role of the Lion, and the Arizona state legislature along with Sheriff Joe Arpaio – as the thorn in the White House’s paw. The part of Androcles would be played by the mainstream media itself, dutifully rescuing the lion from an annoying state effort to inflict pain on the White House. 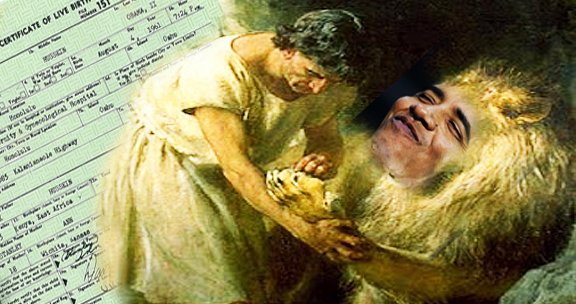 From a Constitutional perspective however, the roles represented would look more like this: the Lion represents the 50 States of the Union, and the thorn in its paw is Obama’s inability to clear his name in the face of a damning investigation into his eligibility to hold the office of US President. This thorn is buried deep into the fabric of the Union and it also includes the ruling establishment’s own clandestine effort to conceal the truth.

And, what of the slave Androcles? Androcles should be played by the press, the fabled Fourth Estate or ‘watchdog’, supposedly meant to be a dutiful servant of the people of The United States. Sadly, here in 2012, those romantic tales of the mainstream corporate press fighting corruption and bringing criminal activity in government to book are all but ancient history.

So far, media coverage of Arizona’s “Candidate Certification Bill” HB2480 has been dismissive, ignoring the contents of the Bill.  The Establishment’s lapdog corporate media have only seen fit to delve into its own pre-laid surface covering the issue, with its own adolescent level analysis dismissing Arizona’s efforts as a mere “Birther Bill”, and attacking Arizona ad hominem as “the Birther state”.

For an event as unprecedented as this, the ensuing intentional media blackout which has descended on Obama’s missing birth certificate story is disturbing – but not surprising. Media coverage of law enforcement efforts to this point has been reduced to personally attacking Sheriff Joe Arpaio and his Cold Case Posse – rather than asking critical questions about the actual evidence they have discovered.

So who is left to play Androcles? In this story, it’s rightly being played by elected representatives in Arizona who drafted state Bill HB2480 and Sheriff Joe Arpaio’s Cold Case Posse of volunteer investigators. They are neither heroic, nor extraordinary. They are merely doing the job which has been laid out by the Constitution of the state and country respectively, that is, rightly serving the interests of their constituents – the people of The United States. And so it should be. The Founders of this nation designed their country whereby the government should be servants of the electorate – and not the other way around.

George Washington once described  the ideal relationship between the government and the electorate stating:

“Government is not reason; it is not eloquent; it is force. Like fire, it is a dangerous servant and a fearful master.”

More than anything, the controversy surrounding the President’s lack of authentic identification is an opportunity to test the system and voracity of the laws which are meant to govern how we work and interact in a free Constitutional Republic. Unfortunately, this is not how the story is being framed in the mainstream media.

Sheriff Joe Arpaio’s Cold Case investigation into the forgery and fraud evidence surrounding President  Obama’s PDF birth certificate, Selective Service registration card and the missing INS microfilms – is ongoing and will likely unearth many more discoveries that will further cast a shadow on his Presidency.

The fate of Arizona’s Obama eligibility bill is less certain. If the law is killed in committee or later vetoed by Arizona’s governor, it will only go to prove that persons in positions of power do not have to observe even the basic vetting or requirements of proving their identity – as the average American citizen has to on a daily basis.

Although many would prefer not to face up to it, the whole issue of Obama’s records has become a thorn in the paw of the Union. If employees of the Federal government are not held to the same standards as their state counterparts, or even individuals – then we are staring at nothing less than a modern tyranny.

If we are to learn anything from all this, we should stop to consider who ‘s the Lion in own contemporary political story.