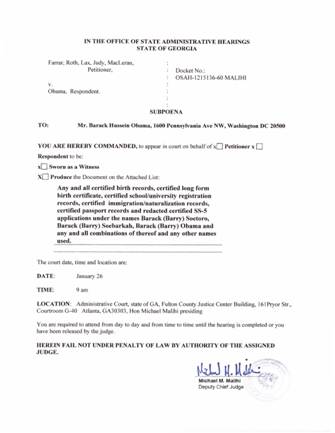 The countdown has officially begun. Barack Hussein Obama is due in court this Thursday, January 26, 2012 to be held accountable to the American people after nearly four years of dodging our demands for his long-form birth certificate.

And now, we know just how his lawyers are attempting to yet again get him out of proving his citizenship eligibility to be President of the United States…

“Presidential electors and Congress, not the state of Georgia, hold the constitutional responsibility for determining the qualifications of presidential candidates,” Obama’s lawyer argued in a since rejected attempt to prevent Obama from appearing at the hearings beginning on Jan. 26.

“The election of President Obama by the presidential electors, confirmed by Congress, makes the documents and testimony sought by plaintiff irrelevant,” Obama’s lawyer said.

You read that right, folks.

Obama’s dream-team of lawyers are arguing that, because of the electoral system, Barack Hussein Obama is not accountable to the American people.

If that’s not enough to get you in gear to defend America and get this elitist pig out of office, well, we’re just not sure what will.

On top of leaving the borders wide open, putting weapons into the hands of violent Mexican cartels, and refusing to deport illegal immigrants, of course), Barack Hussein Obama now considers himself above and beyond the ‘little people’, i.e. you and me. After all, we’re only here to do his bidding while he transforms America into an open-borders socialist state.

But we do not have to stand for this outrage against every single American. There is strength in numbers, and if for no other reason than sheer rage that a President would clearly make the argument that he is not accountable to us, we must act right now.

Per Article 3, section 1 of the Constitution, every inferior Court in the United States (i.e., every court except the Supreme Court) exists at the whim of Congress. According to Article 3, Congress has the unlimited authority to cause every Federal court in the country with the exception of the Supreme Court to cease to exist. And as declared in Article 3, Federal courts would have no jurisdiction to hear most cases absent express authorization from Congress which is why Obama’s billion dollar lawyers are wrong.

Through the separation of powers, Congress cannot subpoena Supreme Court Justices or the President, unfortunately. BUT Congress can make sure Barack Obama’s attempts to intimidate and wage legal warfare against the American people goes nowhere.

This isn’t the first time Obama has tried to dismiss the “birther” cause as beneath his notice, but you can bet he and his Washington cronies are gearing up for a legal battle like no other.  In previous cases concerning Obama’s birth and citizenship, only certain documents were requested or discussed. But in his Jan. 3 subpoena, Judge Malihi requires that the President bring every document that serious eligibility experts have been discussing from the beginning. In the same supoena, Malihi ruled that Georgia state law is very clear – any candidate for federal or state office must meet the qualifications of that office and that Georgia electors have the right to challenge those qualifications in court.

Malihi flatly denied Obama’s motion to dismiss and scheduled a court date on January 26 to give Obama the opportunity to lay the issue of his birth and citizenship to rest once and for all. Reportedly, Judge Malihi has also subpoenaed Hawaii Health Department officials and commanded them to produce an original certified copy of Obama’s long form birth certificate… a document which the White House has failed to produce time and time again despite the demands of concerned American Citizens.

This issue doesn’t rest with just proving without a doubt that Barack Obama is a liar and a socialist imposter. Oh no, this case will open the largest can of worms Washington has ever seen, because whether he was born in Hawaii or not, it can be compellingly argued under law that according to binding precedents laid out by the Supreme Court, Barack Hussein Obama II does not qualify as a natural born Citizen.

We know. It sounds too good to be true. But it is nothing but the truth, unlike the hogwash tossed out by the White House to try and pacify us restless U.S. Citizens who are sick-and-tired of Washington’s manipulation with our borders and our economy.

A closer look at the U.S. Constitution shows a very clear requirement, in a unique usage and application of the term, that the president must be a “natural born Citizen” to be eligible for the nation’s highest office. And according to the Founding Fathers, a “Natural born Citizen” is distinct and different than “Citizen” and even “native born Citizen.”

By his own admission that his father was a Kenyan native and British subject, Barack Hussein Obama already does NOT meet the Constitutional standard of “natural born citizen” that was established by the 1875 unanimous Supreme Court ruling Minor v. Happersett. WHY? Because the Court decided very clearly in this case and in others that a “natural born Citizen” is one who is born on U.S. soil to U.S. citizen parents.

The future of our country will be determined just three short days from now, on Jan 23., when hearings have been schedules for three separate issues raised by Georgia residents who are challenging Obama’s name on the 2012 ballot – which they are allowed to do under state law.

They are demanding that Barack Hussein Obama II, unless he satisfactorily proves he is a natural born U.S. Citizen, be removed from the 2012 Presidential Ballots in Georgia.

Failure to appear on the Georgia ballot would cost Obama devastating media, and 15 electoral votes . But what if he lost them all?

That’s where you and I come in.

Obama needs every vote he can get in 2012 – if we can get just one state to remove his name from their ballots, he does not stand a chance. To do this, though, we need tens of thousands of messages overwhelming the offices of every single Secretary of State, since THEY are the ones who are ultimately responsible for determining who qualifies to be on the ballot – and, of course, who doesn’t!

It’s possible, but we need your help.

OUR STATES MUST HEAR FROM US. THERE IS NOT A SECOND TO WASTE IN MAKING YOUR VOICE HEARD LOUD AND CLEAR.

DEMAND THAT BARACK OBAMA IS HELD ACCOUNTABLE TO “WE THE PEOPLE”