President elect Barack Obama made choices today for “a broad and diverse team” in Chicago, reports the Associated Press. Hillary Clinton, Robert Gates, former Gen. James Jones, Eric Holder, Janet Napolitano, and Susan Rice “round” out this “change” team which is, of course, not change but a seamless transition between the Bush neocons and Obama’s decidedly neoliberal choices.

Consider the following uncomfortable facts that the corporate media will never tell you in a month of Sundays:

Hillary Clinton: As Secretary of State, Hillary Clinton will continue the Bush-Clinton legacy of mass murder and “humanitarian” interventions in “failed states,” that is to say states not toting the New World Order party line.

Clinton wrote for the Council on Foreign Relations publication Foreign Affairs that ending “the war in Iraq is the first step toward restoring the United States’ global leadership,” never mind her 2002 Senate vote allowing Bush and the neocons to invade Iraq and subsequently slaughter over a million Iraqis.

Clinton, as a member of the Senate Armed Services Committee, has stated she wants to send more troops into the Afghan meat grinder and have them chase the CIA-created Taliban and al-Qaeda around. Afghanistan needs to get “as much, if not more attention” than Iraq, said Clinton earlier this year on a campaign stop in Cape Fear, North Carolina, an appropriately named venue.

“The next president will be the first to inherit two wars, a long-term campaign against global terrorist networks, and growing tension with Iran as it seeks to acquire nuclear weapons. The United States will face a resurgent Russia whose future orientation is uncertain and a rapidly growing China that must be integrated into the international system,” Clinton wrote for the CFR. In other words, the wars will continue, Iran will be “confronted” (bombed into submission), and Russia and China forced into the “international system,” in other words the bankster system that thrives on looting and imposed debt misery.

Clinton, as Secretary of State, will continue the phony GWOT indefinitely. “It is essential that we win this war against these borderless terrorists, but it is, I believe, critical that we once again recommit ourselves to that American internationalism that I mentioned in the beginning,” Clinton told Richard Haass and the Council on Foreign Relations in 2003. Internationalism, of course, is inseparable from neoliberal globalism of the sort the CFR has pushed for decades.

Robert Gates: More than anything, keeping Robert Gates on at the Pentagon is a signal to the plebs that the neocon policies of the Bush administration will stay in effect, albeit with a few minor changes and a lot of window dressing.

Gates is a loyal Bush senior stooge. During Bush 41’s presidency, Gates served as deputy national security adviser and then as CIA director. He was dean of the Bush School and then president of Texas A&M, which is where the Bush presidential library is located. “In other words, Bob Gates is a Bush 41 kinda guy,” writes Ivo Daalder.

“The Iran Contra affair in which Robert Gates was implicated was part of the architecture of the ‘war on terrorism’. What is rarely acknowledged is that part of the proceeds of the illegal weapons sales to Iran were also used to finance the CIA sponsored Islamic brigades (i.e. Al Qaeda) involved in the Soviet-Afghan war. These covert operations in support of Al Qaeda paved the way for the ‘war on terrorism’ which constitutes the cornerstone of US National Security doctrine,” writes Michel Chossudovsky.

As Obama’s Secretary of Defense, Robert Gates will oversee the military aspects of this doctrine with an invasion of Pakistan and further involvement in Afghanistan.

Gen. James Jones: Former Marine general and former NATO supreme commander James Jones will be Obama’s National Security Advisor. Jones sits on the board of directors of the Boeing Company, Chevron, and NATO’s Atlantic Council of the United States. Jones is cozy with the Council on Foreign Relations. He is reportedly a good friend of John McCain and is respected by Republicans.

In essence, Jones will serve as Big Oil’s security chief. “Jones is currently a director of Chevron Oil. He also heads of the Chamber of Commerce’s Institute for 21st Century Energy — a group lobbying on energy issues in DC and described by the Grist as ‘part of the Republican machine, dominated by — and lobbying fiercely for the interests of — Big Oil, Big Auto, Big Pharma, and other such Bigs,'” writes Mitchell Anderson.

“Jones would be reflective of two huge Obama priorities,” notes Spencer Ackerman. “First, Afghanistan. As NATO Commander, Jones ceaselessly lobbied the European allies for greater assistance in the Afghanistan war. Second, energy security. Jones is widely known to be an advocate of alternative energy sources, and, as Politico notes, chairs an energy task force for the U.S. Chamber of Commerce. And of course there’s the good optics of such a well-respected general being Obama’s closest White House aide on foreign policy.”

Incidentally, even though former Sec. Def. Rumsfeld exiled Jones to his mostly ceremonial NATO post, the general is onboard with the coming attack against Pakistan and possibly Iran. During a September, 2006 Senate Foreign Relations Committee hearing, Jones testified that it was “generally accepted” that Taliban leaders operated out Quetta, Pakistan.

Finally, Jones “has pointed to Camp Bondsteel in Kosovo as a ‘model’ for US bases elsewhere,” writes Chad Nagle. “Anyone who has seen the gigantic and ominous Bondsteel, set amid the wasteland of bombed out and destitute Kosovo, has an idea of what the US-imposed New World Order will look like – destroyed dumps where a fortress houses thousands of American military personnel behind its walls and the fearful population outside can rot in hell.

It was, of course, the husband of Obama’s choice for Secretary of State, Hillary Clinton, that turned Kosovo and the former Yugoslavia into a wasteland. An Obama administration promises more of the same.

Eric Holder: Former Clintonite and Deputy Attorney General Eric Holder will be Obama’s attorney general. Holder is probably best and infamously remembered for his role in the controversial pardon of billionaire fugitive Marc Rich, the FBI Most Wanted criminal who colluded with Iran at a time when that country was holding U.S. hostages.

In private practice as an attorney, Holder represents Merck and helped negotiate an agreement with the Justice Department for Chiquita Brands International in a case that involved Chiquita’s payment of “protection money” to the United Self-Defense Forces of Colombia, a group on the U.S. government’s list of terrorist organizations.

Most disturbing, however, is the role Holder played in the D.C. v. Heller ruling on handguns. Holder joined the Reno-led amicus brief, which urged the Supreme Court to uphold Washington, D.C.’s handgun ban and said the Department of Justice from Franklin Roosevelt through Bill Clinton had always believed that the Second Amendment does not protect the rights of individuals to own guns for personal use. In short, Holder is a gun grabber who is opposed to the Second Amendment. As attorney general, we can bet he will work tirelessly to outlaw all firearms in the United States.

Finally, Holder has advocated government censorship of the internet. “It is gonna be a difficult thing, but it seems to me that if we can come up with reasonable restrictions, reasonable regulations in how people interact on the Internet, that is something that the Supreme Court and the courts ought to favorably look at,” Holder told NPR after the Columbine massacre in 1999.

Janet Napolitano: Arizona Gov. Janet Napolitano will be Obama’s Homeland Security secretary. She will continue the do-nothing approach to illegal immigration. “Far from being a border hawk, Arizona Gov. Janet Napolitano frequently blocked efforts to curb illegal immigration, say enforcement advocates concerned about her expected nomination to be the Homeland Security secretary under President Barack Obama,” reports Fred Lucas for CNS News. She opposes a border fence and favors a controversial technology visa program and favors a “stringent pathway to citizenship,” in other words allowing millions of illegal aliens to become citizens.

As a CFR member, Napolitano is onboard with the globalist agenda to impoverish the American worker. She has proposed endless H-1B visas in order to displace skilled workers. “I’m going to direct the Secretary of Labor to tell us what our labor market needs are, and we’re going to adjust the visas accordingly, and we’re going to put in place a process to do that, protecting jobs for American workers but realizing that we will have a national labor shortage moving forward. I’m going to pay specific attention to certain areas such as H-1B visas [for skilled workers], where there is such a demonstrated need and there’s more than enough work for everyone to go around,” Donald A. Collins quotes her as declaring.

Susan E. Rice: Ms. Rice, a former assistant secretary of state for African Affairs under Clinton and a Rhodes scholar, is a minion of the Brooking Institution. Brookings is a neolib “think tank” par excellence. It is funded by the Ford Foundation, the John D. & Catherine T. MacArthur Foundation, the Rockefeller Foundation, American Express, the Bank of America, Lockheed Martin, Walmart, Goldman Sachs, and the United Nations.

Rice, who the neocons consider a “leftist,” is also a member of the Council on Foreign Relations and the Aspen Strategy Group, the latter where she rubs elbows with the likes of Brent Scowcroft, the neocon Eliot A. Cohen (a “leading champion” of the war in Iraq), Madeleine Albright (a proponent of mass murdering Iraqi children), CFR president Richard N. Haass, and other crossover neocons and neolibs. 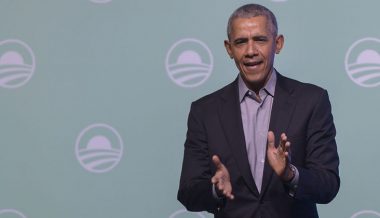