Filmmaker and researcher Joel Gilbert, speaking at the National Press Club, blamed the role of the national media, who’ve violated their journalists’ creed by refusing to investigate and expose the obvious issues with the sitting President and his claimed, indeed hailed, background. Instead, reporters could win a Pulitzer Prize just by reporting on Gilbert’s DVD and research (yet they won’t touch the story). Meanwhile, all evidence indicates that Obama’s official story is a fraud, with a classic Marxist background lurking in the shadows. Gilbert announced his intentions to send millions of copies of the DVD to homes in several key swing states to take the issue up directly with voters…

Get this bombshell film at Infowarsshop.com: 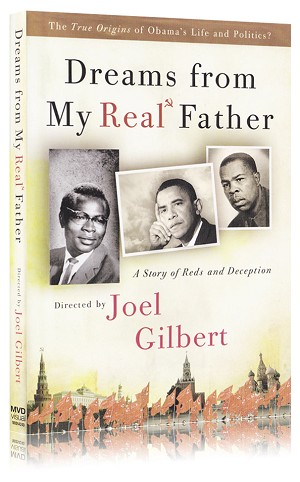 Why does it matter who Barak Obama’s father really is ?

It matters because Barack Obama sold himself to America as the multi-cultural ideal, a man who stood above politics. His father was a goat herder from Kenya, so he would bring people together, so the story went. As a result, the public perceived Barack Obama as a nice man with an inspiring family story.

However, as shown in Dreams from My Real Father, Barack Obama in fact has a deeply disturbing family background, which he intentionally hid, in order to obscure a Marxist political foundation. While voters will overlook some fudging by politicians, promoting a false family background to hide a Marxist agenda irreconcilable with American values is a totally unacceptable manipulation of the electorate.

At age 18, Barack Obama admittedly arrived at Occidental College a committed revolutionary Marxist. Based on Obama’s own accounts, there can be no doubt that Frank Marshall Davis, a Communist Party USA Propagandist, and former Soviet Agent, indoctrinated Obama with a Marxist world view during his formative years. This is a known phenomenon amongst the radical left, referred to as “Red Diaper Babies” or “hand-me-down Marxism.” Much of the leadership of the SDS and Weather Underground were children of Communist Party USA members, including Katherine Boudin, Jeff Jones, and many more. David Axelrod is also a “Red Diaper Baby”, his mother was a Red journalist.

Obama’s election was not a sudden political phenomenon. It was the culmination of an American socialist movement that Frank Marshall Davis nurtured in Chicago and Hawaii, and has been quietly infiltrating the US economy, universities, and media for decades.

As I speak today, here at the National Press Club in Washington DC, what strikes me as most disturbing is that any one of the hundreds of American journalists in this building could win the Pulitzer Prize, just by writing about the evidence presented in Dreams from My Real Father.

I accuse all major American Television networks and most Cable News networks of gross violations of the Journalists Creed.

I accuse ABC, NBC, and CBS network news Divisions of violating the public trust by refusing to cover my documentary film, and for ignoring all the revelations about Obama’s background that other researchers have produced.

I accuse MSNBC of an intentional and often vile campaign of lies and misrepresentations to protect Barack Obama’s false narrative.

I accuse Newmax.com of censorship and suppression of the news. On May 2 of this year, I paid Newsmax $ 4,350, in advance, for an advertising campaign. They pulled it at the last second. “Why?” They said it was because they wanted “to move to the Center”.

I accuse all leftist website-based news organizations of intentional bias – like Talkingpointsmemo.com. On April 26th, they requested a review copy of Dreams from My Real Father, which we provided, but instead they illegally copied parts of the film and put them You Tube, and wrote that now people don’t need to buy the film.

I also accuse all the main stream print media, like the Washington Post, the New York Times, Newsweek, Time Magazine, all their ilk, of intentionally suppressing the truth about Barack Obama’s history and agenda and refusal to cover my findings.

The public looks to all of the news organizations in this building, the National Press Club, for truth. However, an astounding number, almost all of them, have all failed to live up to the Journalist’s Creed, and thus failed their responsibility to the public. Only a very few news organizations, like WorldNet Daily, Drudge Report, USA Survival and a handful of independent journalists like Jack Cashill, have done their jobs as journalists – with courage and honesty.

FOR FULL TRANSCRIPT, go to: http://obamasrealfather.com/breaking_news003/