There is a grassroots protest movement unfolding across America, which includes people from all walks of life, from all age groups, conscious of the need for social change and committed to reversing the tide.

The grassroots of this movement constitutes a response to the “Wall Street agenda” of financial fraud and manipulation which has served to trigger unemployment and poverty across the land.

Does this movement constitute in its present form an instrument of meaningful reform and social change in America?

What is the organizational structure of the movement? Who are its main architects?

Has the movement or segments within this movement been co-opted?

This is an important question, which must be addressed by those who are part of the Occupy Wall Street Movement as well as those who, across America, support real democracy.

Historically, progressive social movements have been infiltrated, their leaders co-opted and manipulated, through the corporate funding of non-governmental organizations, trade unions and political parties. The ultimate purpose of “funding dissent” is to prevent the protest movement from challenging  the legitimacy of the Wall Street elites:

“In a bitter irony, part of the fraudulent financial gains on Wall Street in recent years have been recycled to the elites’ tax exempt foundations and charities. These windfall financial gains have not only been used to buy out politicians, they have also been channelled to NGOs, research institutes, community centres, church groups, environmentalists, alternative media, human rights groups, etc.

The inner objective is to “manufacture dissent” and establish the boundaries of a “politically correct” opposition. In turn, many NGOs are infiltrated by informants often acting on behalf of western intelligence agencies. Moreover, an increasingly large segment of the progressive alternative news media on the internet has become dependent on funding from corporate foundations and charities.

The objective of the corporate elites has been to fragment the people’s movement into a vast “do it yourself” mosaic.” (See Michel Chossudovsky, Manufacturing Dissent: the Anti-globalization Movement is Funded by the Corporate Elites, Global Research, September 20, 2010)

At the same time, “manufactured dissent” is intent upon promoting political and social divisions (e.g. within and between political parties and social movements). In turn, it encourages the creation of factions within each and every organization.

With regard to the anti-globalization movement, this process of division and fragmentation dates back to early days of the World Social Forum. (See Michel Chossudovsky, Manufacturing Dissent: The Anti-globalization Movement is Funded by the Corporate Elites, Global Research, September 20, 2010)

Most of the progressive organizations of the post-World War II period, including the European “Left” have, in the course of the last thirty years, been transformed and remoulded. The “Free Market” system (Neoliberalism) is the consensus of the “Left”. This applies, among others, to the Socialist Party in France, the Labour Party in Britain, the Social Democrats in Germany, not to mention the Green Party in France and Germany.

In the US, bi-partisanship is not the result of the interplay of Congressional party politics. A handful of powerful corporate lobby groups control both the Republicans and the Democrats. The “bi-partisan consensus” is established by the elites who operate behind the scenes. It is enforced by the main corporate lobby groups, which exert a stranglehold over both major political parties.

In turn, the leaders of the AFL-CIO have also been co-opted by the corporate establishment against the grassroots of the US labor movement.

The leaders of organized labor attend the annual meetings of the Davos World Economic Forum (WEF). They collaborate with the Business Roundtable. But at the same time, the grassroots of the US labor movement has sought to to carry out organizational changes which contribute to democratizing the leadership of individual trade unions.

The elites will promote a “ritual of dissent” with a high media profile, with the support of network TV, the corporate news as well as the internet.

The economic elites — which control major foundations — also oversee the funding of numerous civil society organizations, which historically have been involved in the protest movement against the established economic and social order. The programs of many NGOs (including those involved in the Occupy Wall Street Movement) rely heavily on funding from private foundations including the Ford, Rockefeller, MacArthur, Tides foundations, among others.

Historically, the anti-globalization movement which emerged in the 1990s has opposed Wall Street and the Texas oil giants controlled by Rockefeller, et al. Yet the foundations and charities of Rockefeller, Ford et al have, over the years, generously funded progressive anti-capitalist networks as well as environmentalists (opposed to Big Oil) with a view to ultimately overseeing and shaping their various activities.

“Colored revolutions” are supported by the National Endowment for Democracy, the International Republican Institute and Freedom House, among others. The objective of a “colored revolution” is to foment social unrest and use the protest movement to topple the existing government. The ultimate foreign policy goal is to instate a compliant pro-US government (or “puppet regime”).

In Egypt’s “Arab Spring”, the main civil society organizations including  Kifaya (Enough) and The April 6 Youth Movement were not only supported by US based foundations, they also had the endorsement of the US State Department. (For details see Michel Chossudovsky, The Protest Movement in Egypt: “Dictators” do not Dictate, They Obey Orders, Global Research, January 29, 2011)


“In a bitter irony, Washington supported the Mubarak dictatorship, including its atrocities, while also backing and financing its detractors,… Under the auspices of Freedom House, Egyptian dissidents and opponents of Hosni Mubarak (see above) were received in May 2008 by Condoleezza Rice … and White House National Security Adviser Stephen Hadley.” (See  Michel Chossudovsky, The Protest Movement in Egypt: “Dictators” do not Dictate, They Obey Orders, Global Research, January 29, 2011)

The following year (May 2009), a delegation of Egyptian dissidents was received by Secretary of State Hillary Clinton (See below)

US Secretary of State Hillary Clinton speaks with “Egyptian activists promoting freedom and democracy”, prior to meetings at the State Department in Washington, DC, May 28, 2009.

Dissidents of Egypt’s April 6 Youth Movement, which, for several years, was in permanent liaison with the US Embassy in Cairo, were trained by Serbia’s Centre for Applied Non Violent Action and Strategies (CANVAS), a consulting and training firm specializing in “Revolution” supported by DH and the NED.

CANVAS was established in 2003 by OTPOR, a CIA supported Serbian organization which played a central role in the downfall of Slobodan Milosevic in the wake of the 1999 NATO bombing of Yugoslavia.

Barely two months after the end of the 1999 bombings of Yugoslavia, OTPOR was spearheaded into playing a central role in the installation of a US-NATO sponsored “caretaker” government in Serbia. These developments also paved the way towards the secession of Montenegro from Yugoslavia, the establishment of the US Bondsteel military base and the eventual formation a Mafia State in Kosovo.

In August 1999, the CIA is reported to have set up a training program for OTPOR in Bulgaria’s capital Sofia:

“In the summer of 1999, the head of the CIA, George Tenet, set up shop in Sofia, Bulgaria to “educate” the Serb opposition. Last August. 28 [2000], the BBC confirmed that a special 10-day class had been given to the Otpor militants, also in Sofia.

The CIA program is a program in successive phases. Early on, they flatter the Serbs’ patriotism and spirit of independence, acting as if they respect these qualities. But after having sown confusion and broken the unity of the country, the CIA and NATO would go much further.”

OTPOR’s Centre for Applied Non Violent Action and Strategies (CANVAS) describes itself as “an International network of trainers and consultants” involved in the “Revolution Business”. Funded by the National Endowment for Democracy (NED), it constitutes a  consulting outfit, advising and training US sponsored opposition groups in more than 40 countries.

Egypt Tahir Square: What appeared to be a spontaneous democratization process was a carefully planned intelligence operation. View video below.

Egypt. The Logo of the April 6 Movement 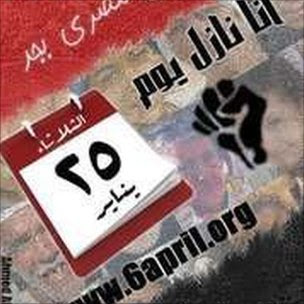 It is worth noting the similarity of the logos as well as the names involved in CANVAS-OTPOR sponsored “Colored Revolutions”  The April 6 Youth Movement in Egypt used the clenched fist as its logo, Kifaya (“Enough!”) has the same name as the Youth Protest movement supported by OTPOR in Georgia which was named Kmara! (“Enough!”). Both groups were trained by CANVAS. The Role of  CANVAS-OTPOR in the Occupy Wall Street Movement

Several key organizations currently involved in The Occupy Wall Street (#OWS) movement played a significant role in “The Arab Spring”. Of significance, “Anonymous“, the social media “hacktivist” group, was involved in waging cyber-attacks on Egyptian government websites at the height of “The Arab Spring”.(http://anonops.blogspot.com)

The actions of “Anonymous” in Syria are consistent with the framework of the “Colored Revolutions”. They seek to demonize the Syrian regime and create political instability. (For analysis on Syria’s Opposition, see Michel  Chossudovsky, SYRIA: Who is Behind The Protest Movement? Fabricating a Pretext for a US-NATO “Humanitarian Intervention” Global Research, May 3, 2011)

Both CANVAS and Anonymous are now actively involved in the Occupy Wall Street Movement.

The precise role of CANVAS in the Occupy Wall Street Movement remains to be assessed.

Ivan Marovic, a leader of CANVAS recently addressed the Occupy Wall Street protest movement in New York City. Listen carefully to his speech. (Bear in mind that his organization CANVAS is supported by NED).

Marovic acknowledged in an earlier statement that there is nothing spontaneous in the planning of a “revolutionary event”:

“It looks like people just went into the street. But it’s the result of months or years of preparation. It is very boring until you reach a certain point, where you can organize mass demonstrations or strikes. If it is carefully planned, by the time they start, everything is over in a matter of weeks.” (Quoted in Tina Rosenberg, Revolution U, Foreign Policy, February 16, 2011)

Similarly, Maravic’s statement also suggests that The Occupy Wall Street movement was also the object of careful advanced planning by a number of key organizations on tactics and strategy.

It is worth noting that one of OTPOR’s tactics is “not try to avoid arrests”, but rather to “provoke them and use them to the movement’s advantage.” as a PR strategy. (Ibid) 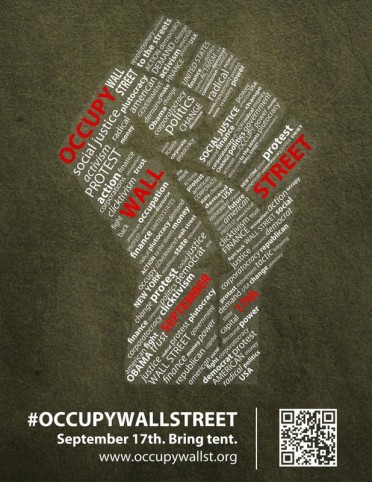 PART II of this article will examine the mainstay of the Occupy Wall Street movement, including the role of NGO organizers.