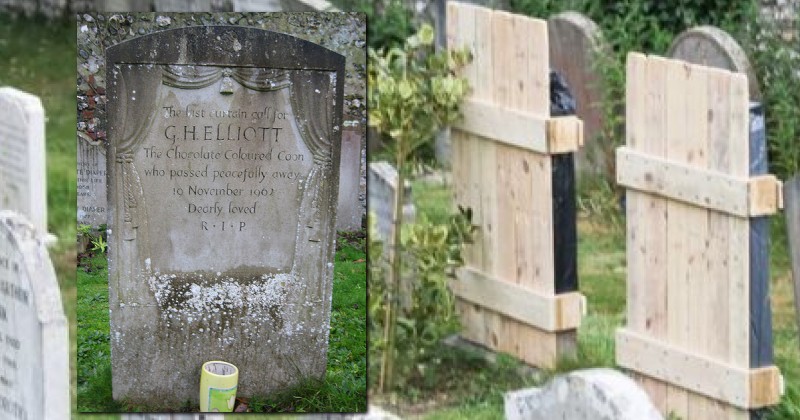 The headstones of two music hall singers at a cemetery in the UK have been covered up with wooden pallets and trash bags to hide “offensive” language.

“The gravestones of G H Elliott and Alice Banford, who both wore blackface, are now covered at St Margaret’s Church in Rottingdean,” reports BBC News.

The Archdeacon for Brighton said efforts were underway to contact family members in order to have the inscriptions changed.

“I find the inscription on these two headstones deeply offensive and am sure that the vast majority of people would agree and would want it changed,” said Archdeacon Martin Lloyd Williams.

“Over the last few months, investigations have been underway as to the legal and other considerations around seeking a solution, not least seeking to identify and contact the next of kin who own the headstones,” he added.

A BBC report on the the story was too petrified to even name the word that was so offensive.

The term in question is the word “coon,” which is engraved on G.H.Elliott’s gravestone. His stage name was “The Coloured Coon”.

During a BBC Radio 4 show last week, host Nick Robinson had to apologize after one of his guests used the “racial slur” on air.

After comedian Harry Enfield uttered the word, Robinson intervened, to which Enfield responded, “Well, that was his name on stage.”

Censoring headstones is an unprecedented new level of absurdity – literally desecrating the dead in the name of political correctness – but it no doubt came as a result of “offensive” statues being covered up and removed across the country in response to Black Lives Matter protests.

The statue of Winston Churchill in central London remains imprisoned inside a gray box despite Prime Minister Boris Johnson asking, “What has the world come to when one of this country’s greatest-ever leaders – perhaps our greatest – has to be shielded from the wrath of the mob?”

What a shame that he isn’t the leader of the country and can’t do anything about it.