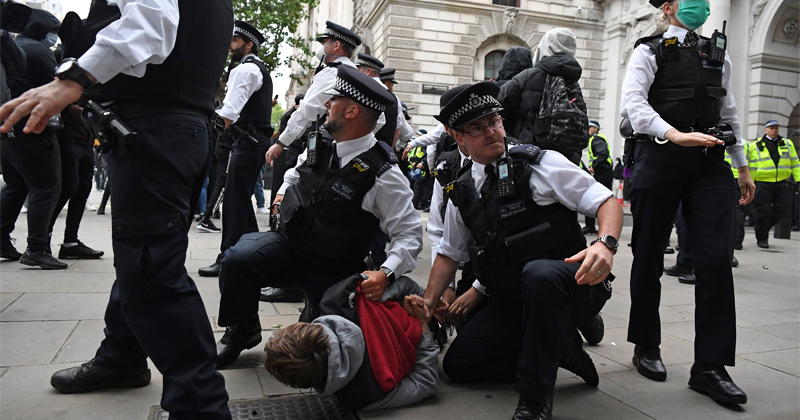 A new nationwide tally produced by the Associated Press finds protest arrests across America has topped 10,000 since the death of George Floyd in Minneapolis last week.

Events quickly spiraled in many major American cities into rioting, looting, and general lawlessness as mobs of angry protesters took ever entire city blocks; however, many demonstrations have remained peaceful — surprisingly such as protests in Flint, Michigan — notable given its recent history of tensions with local government over the water crisis.

Los Angeles has seen the most arrests nationwide, accounting for over a quarter, while the second most is in New York, with Dallas and Philadelphia to follow.

The bulk of arrests have been for low-level offenses like curfew violation or failure to disperse, while multiple hundreds have been detained for looting and burglary.

Another interesting finding is related to the ‘outside agitators’ theory pushed by some mayors and governors of various states, who have alleged most of the rioting and looting was carried out by people outside their states.

“The AP found that in a 24-hour period last weekend, 41 of 52 people with protest-related arrests in the city had a Minnesota driver’s license,” The Hill summarizes of the figures.” “About 86 percent of the more than 400 people arrested in Washington, D.C., as of Wednesday afternoon were from the District, Maryland or Virginia.”

Not even Hollywood could come up with a scene this lawless #riots2020 pic.twitter.com/cumAzIzo2Y


Perhaps the most important statistics to come out of the week of protest mayhem, however, will be related to the coronavirus spread within the protesting throngs.

Over the weekend and at the start of the week US health officials warned of the protest risks regarding the potentially deadly virus:

The risk is even more pronounced when factoring in the more than 5,600 demonstrators who have been arrested, according to The Associated Press.

Not only are jails crowded indoor spaces, but protesters sat in vehicles at close range for an extended period of time, which increases the risk for onward transmission of the virus, Osterholm explained.

It’s expected a dreaded second wave could come out of this, especially given the current protest epicenters of New York, Minnesota and Los Angeles were already hard-hit places in terms of COVID-19.