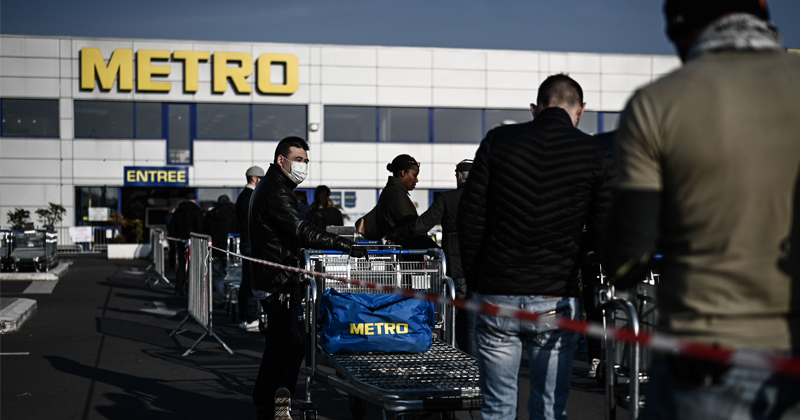 The coronavirus pandemic is continuing to take a toll globally, as the number of confirmed cases has climbed to more than 1,270,000, with over 69,450 deaths.

Millions of people around the world who are forced to stay inside due to the COVID-19 quarantine are running out of money and patience. Here’s a closer look at how the situation around the fallout of the coronavirus may further unfold in Europe and the United States.

In a statement last week, Qu Dongyu, director-general of the Food and Agriculture Organisation of the United Nations (FAO), called for more measures to be taken “to minimise potential impacts [of the coronavirus] on the food supply” amid the ongoing COVID-19 lockdowns.

He also stressed the need “to contain ‘panic buying’ and the hoarding of food and other essential items”.

The remarks came after Vietnam, one of the world’s top three rice exporters, suspended its global market supplies of the cereal, while Kazakhstan imposed a ban on the export of wheat flour, buckwheat, and vegetables, including onions, carrots, and potatoes. Russia has also suspended supplies of buckwheat and rice abroad, with Belarus moving to postpone buckwheat, onion, and garlic exports.

Risk of Riots in Italy

In Italy, the European country hardest hit by the coronavirus, a nationwide lockdown, which was originally scheduled to end on 3 April, has now been extended to beyond Easter.

Palermo Mayor Leoluca Orlando warned last week that the risk of riots in southern Italy is very high because citizens’ anger over the COVID-19-related food woes may be used by criminal structures seeking to “destabilise the system”.

“We must give basic necessities to those who are hungry and we must do it immediately, without bureaucratic complications. The south will implode first and then other Italian regions. Contagion will arrive in the south later, but the social emergency will erupt here first due to the fragile conditions”, he said in an interview with the newspaper La Repubblica.

Orlando was echoed by Italian Minister for the Southern Regions Giuseppe Provenzano, who pointed to increasing social tensions and the possibility of civil unrest in the country’s poverty-stricken regions.

“I am afraid that concerns by large part of the population over health, income and the future amid the ongoing coronavirus crisis will turn into anger and hatred”, he told La Repubblica.

The remarks came after the newspaper reported that in Palermo and Naples, the police had to safeguard local supermarkets following several incidents of looting.

Some American experts have, meanwhile, voiced alarm that the situation around COVID-19 in the US will soon follow the “Italian scenario”, given the current food shortages, soaring unemployment rate, and disruption of public services in the country.

“The latest I’ve seen is we anticipate spikes in Boston, which has a relatively good health care system, Detroit, [and] New Orleans. These are places that have already been hit hard for numerous reasons over the last decade or so, and now to have a public health epidemic on top of everything. I’m deeply concerned”, she was cited by Yahoo Finance as saying late last month.

This view was shared by Dr Anthony Fauci, the director of the National Institute of Allergy and Infectious Disease, who told CNN that as far as New Orleans is concerned, “it putters along and you think you’re OK, then it starts to go up a little and then bingo — it goes up in an exponential way; that’s what’s happening in New Orleans right now”.

I’m worried about emerging situations in New Orleans, Dallas, Atlanta, Miami, Detroit, Chicago, Philadelphia, among others. In China no province outside Hubei ever had more than 1,500 cases. In U.S. 11 states already hit that total. Our epidemic is likely to be national in scope. pic.twitter.com/jfN6YYRT07


Harvard Global Health Institute Director Dr Ashish Jha, in turn, predicted that the coronavirus outbreak “is going to hit every city in America”.

“There is no question about it. New York is going first. Will [the spread] be at the same ferocity? It may or may not in different cities. […] I am incredibly worried about Louisiana, and specifically New Orleans. I am very worried about Atlanta”, he argued.

There are already more than 304,800 confirmed COVID-19 cases in the US, with over 7,600 fatalities, according to Johns Hopkins University’s latest estimates.

A comedian makes more sense than a Deep State bureaucrat.