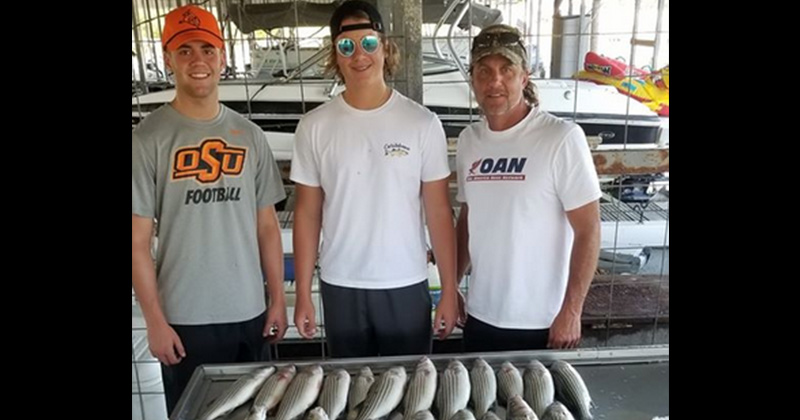 A photograph of Oklahoma State University’s head football coach Mike Gundy wearing a One America News t-shirt while on a fishing trip has seriously triggered liberal sports fans and some of the team’s players.

One America News is an alternative news network with conservative leanings.

Five hours later, Gundy was on top of the “trending” section of Twitter.

Oklahoma State’s star running back Chuba Hubbard, who led the nation in rushing last season and is an early Heisman Trophy frontrunner, posted the image on Twitter, saying, “I will not stand for this.. This is completely insensitive to everything going on in society, and it’s unacceptable. I will not be doing anything with Oklahoma State until things CHANGE”

I will not stand for this.. This is completely insensitive to everything going on in society, and it’s unacceptable. I will not be doing anything with Oklahoma State until things CHANGE. https://t.co/psxPn4Khoq

Hubbard, who is from Canada, was backed up by fellow Canadian and teammate Amen Ogbongbemiga, who wrote, “I stand with him!”

I stand with him! https://t.co/WWOs2ALxml

As an O-line we stand and support Chuba https://t.co/5zau9yTpCF

The blue check marks on Twitter also felt the need to voice their disapproval of the coaches’ attire.

No black player should ever play for Mike Gundy ever again https://t.co/CgkANq4s5b

I can't fathom how stupid any human has to be at this point in time to wear an OAN t-shirt. But a football coach? Damn, Gundy. You're special dumb.

Mike Gundy on OAN, the Kremlin-funded Trump proganda arm that slandered the elderly Buffalo victim as an ANTIFA provocateur and calls BLM a criminal organization:

“They just report the news. There’s no commentary. No left. No right. So refreshing.”

Good for you Chuba Hubbard. pic.twitter.com/1TRVitmkbI

Gundy used his freedom of speech to endorse a network that posited a 75-year-old protester bled from the ears on purpose, with an anchor who called Black Lives Matter a criminal organization.

Totally within Gundy’s rights to wear a shirt.

Now his players can use theirs. https://t.co/BEjWR8FYol

While the t-shirt has created quite the controversy, Gundy’s previous comments about Twitter could shed light on his current thoughts on the negative feedback he’s receiving online.

No Coach in all of Sports:

However, not all internet users are jumping on the anti-Gundy bandwagon, as seen in the tweets below supporting the coaches right to free speech.

Welcome to sports in 2020. We now boycott because a coach wore a t-shirt a player didn't like.

This country is going insane. https://t.co/ZReybpgEN9

Oklahoma State coach Mike Gundy is under fire for wearing an “OAN” tshirt on a fishing trip. Really. https://t.co/SXL3Goippk

You won’t stand for a guy wearing a t-shirt you don’t like? Do you think you should be the one dressing him every morning? I mean the narcissism is off the charts. Good Lord.

Coach Gundy should tell this player that as long as he's the head coach, the team will support freedom of speech and thought for ALL and if he has a problem with it, he can go play for a different team. https://t.co/saXfu1enZn

This football coach is about to lose his career because of this shirt he wore. Don't blame me, i didn't make the rules. Just follow this story and see what will happen next. https://t.co/dS38skMgOE