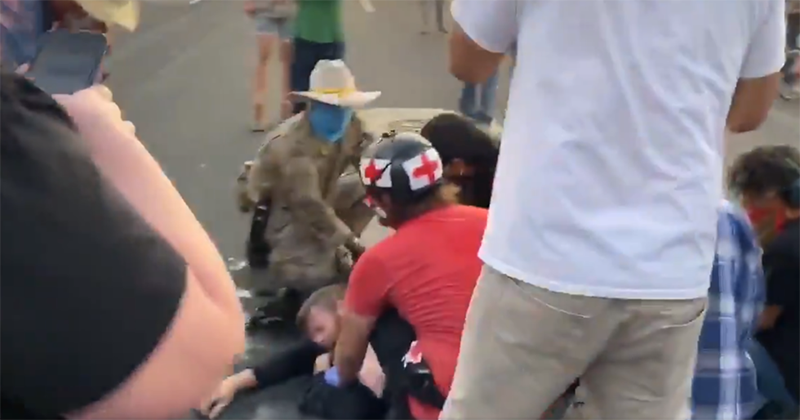 A demonstration in Albuquerque, New Mexico ended in violence after an individual was shot as protesters attempted to topple a statue. Unconfirmed reports claim the shooter was a member of a militia, but this has been disputed.

Demonstrators assembled outside the Albuquerque Museum on Monday, in what was initially billed as a “prayer gathering” and a “peaceful call” for the removal of a nearby statue of a Spanish conquistador.

But it appears the group decided to take more active measures to ensure the statue’s removal – a trash bag was put over the conquistador’s head, and a metal chain was tied around the its neck.

As the crowd began to pull on the chain, all hell broke loose. In a video of the incident, protesters begin to shout at a man carrying a firearm.

A masked protester then strikes him with a skateboard, as someone is heard screaming: “It’s a cop, it’s a cop!”

We just obtained video of the shooting. pic.twitter.com/yjB6NHdKe2

The man then pulls back and slowly walks away as the group follows in pursuit. Screams of “Get him! Follow him!” can be heard.

Guest host Owen Shroyer exposes the Dems and leftist media outlets are ramping up the second wave of race riots.

A protester then attempts to tackle the armed man and, after a brief struggle, several shots are heard.

A video of the aftermath shows a wounded demonstrator lying on the ground as people swarm around him. According to local media, the injured man was transported to hospital and is in a critical but stable condition.

Police in riot gear were quickly at the scene and arrested the shooter. They also deployed tear gas to disperse the crowd.

It’s still unclear what sparked the incident. There are unconfirmed reports that the armed individual was a member of a local militia group but police, with the assistance of the FBI, are still investigating. One local journalist reported that the man “did not seem to have ties” to militia members present at the protest.

Man in blue shirt is who protestors claim fired the gun. pic.twitter.com/L7APCwNi9p

Mayor Tim Keller denounced the violence and announced that the statue, which the protesters failed to tear down, would be removed by the city because it has become an “urgent matter of public safety.”

Governor Michelle Grisham released a statement condemning the shooting, saying that there is “absolutely no space in New Mexico for any violent would-be ‘militia’ seeking to terrorize New Mexicans.” However, many on social media have argued that the shooting was a clear act of self-defense.