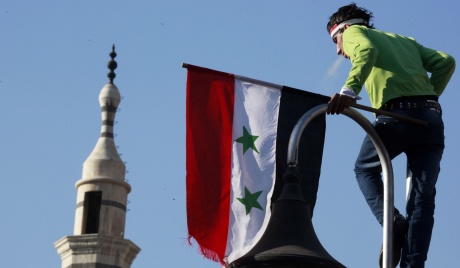 EU foreign ministers have adopted fresh sanctions against Syria, targeting a new list of people and firms to be hit by a travel ban and asset freeze. This is the 11th consecutive round of sanctions to be imposed on the violence-torn country.

Under the new sanctions, agreed on Monday, so-called “restrictive measures” will be enforced against eight more Syrian companies and 22 senior officials, who will be added to an existing blacklist. The companies’ European assets will be frozen, and individuals will be barred from entering the EU.

“We call again for the violence to stop, for the (Arab League) monitors to be able to do their job unheeded,” said European Union foreign policy chief Catherine Ashton as she went into talks with the EU’s 27 foreign ministers.“We’re deeply concerned with the situation in Syria,” she added. “There needs to be a peaceful transition in that country.”

An official announcement on the sanctions is expected later today. No details were immediately available on the identities of the new targets.

The EU has already agreed 10 rounds of sanctions against the regime of President Bashar al-Assad, with some 120 people and companies targeted so far by an EU assets freeze and travel ban. It is also enforcing an arms embargo and a ban on imports of Syrian crude oil.

In December, it expanded its sanctions list to include Syria’s finance and economy ministers, state-owned oil companies and two media organizations.

While the EU is pressing for President Assad’s resignation, only Russia and China can ensure this will be done properly, says Paolo Raffone, the head of the CIPI Foundation, a political think-tank.

“The sanctions are to pressure President Assad and his government to move out and negotiate their stepping down. The way ahead is probably the same as what happened in Yemen. Both China and Russia would like to see an orderly ousting of the current government,” Raffone told RT.

The EU move comes after Syria rejected an Arab League plan for Assad to transfer power to his deputy and make way for a national unity government.Currently the UN estimates more than 5,400 people have been killed in the crackdown on democracy protests since March.

Meanwhile, the Arab League has extended its fact-finding observer mission in Syria for another month. The decision was made during a meeting between Arab foreign ministers on Sunday in the Egyptian capital, Cairo.

The observer mission is meant to be a first step toward implementing an Arab League plan to end the Syria crisis. However the mission has attracted criticism, with accusations by groups including the New York-based Human Rights Watch that Assad has manipulated the mission, moving his forces around instead of removing them from cities, all the while continuing the crackdown.