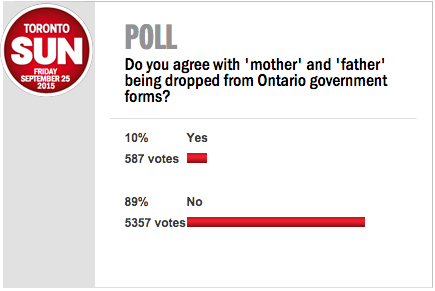 The Canadian province of Ontario is moving to ban the terms “mother” and “father” on government forms, an endeavor which follows in line with similar politically correct efforts across the globe.

On Thursday, the Ontario legislature passed a motion which calls for striking the words “mother” and “father” from forms in the name of “inclusiveness.”

“It’s a motion that’s out there to make sure that government is continuing to look at what we can do to progress and make sure forms are inclusive,” said the motion’s sponsor Glenn Thibeault, a Liberal MP from Sudbury, according to the Toronto Sun.

The motion would alter documents, “including, but not limited to replacing the terms ‘mother’ or ‘father’ with terms such as ‘parent’ or ‘guardian’ to better recognize the rights of LGBTQ parents and others,” The Sun reports.

Thibeault insists his motion’s focus is about creating forms which “better reflect the shape of modern families,” reports the National Post.

“This isn’t about banning the words ‘mother’ and ‘father’ that was mentioned by some members of the press gallery,” the MP said. “This is about making Ontario more inclusive.”

The move, which will not affect birth certificates, is in the form of a non-binding motion, which would allow the Ontario government to make form changes at their leisure.

But some legislators, such as LGBTQ proponent MPP Cheri DiNovo, would like to see the government uphold “parental equality” by making the motion an official law.

Other members of parliament, however, perceive the move as an underhanded attack on traditional gender and parent roles, and question why more form options, such as “parent” and “guardian,” couldn’t be added.

“While calling for more inclusive language, the member is calling for the words ‘mother’ and ‘father’ to be excluded from government forms,” Progressive Conservative MPP Bob Bailey said. “If the member was really serious about being inclusive, he would be asking that words such as ‘parent’ and ‘guardian’ be added — I might add a stress on ‘added’— to government forms, not that the words ‘mother’ and ‘father’ be excluded from them.”

“I know everyone here would agree that the words ‘mother’ and ‘father’ mean many things to many people and shouldn’t be excluded from government forms or our day-to-day vocabulary,” said Bailey.

Another MP, Patrick Brown, agreed that forms should be inclusive, “But I don’t think you need to exclude the terms mother and father — why not include all the terms and that’s respectful of everyone,” he said.

A survey on the Toronto Sun’s article shows nearly 90% of those polled oppose Thibeault’s motion.

“Screw you Ontario,” one person said. “I AM a Mother. I gave BIRTH to my babies. Stop f’ing with MY RIGHTS! I was BORN not MADE. You bunch of stupid twisted sick people. So tired of bowing to sick twisted minds out there. Shame on you!”

Another person decried: “What a waste of time and taxpayer’s dollars! The never ending political correctness thing is getting out of hand IMHO.”

Similar efforts to indoctrinate the public with politically correct terminology have taken place in France, Scotland and here in Massachusetts and California. In 2007, another Canadian province, Nova Scotia, also allowed the alteration of birth certificates for same sex couples to include the terms “spouse” and “other parent.”