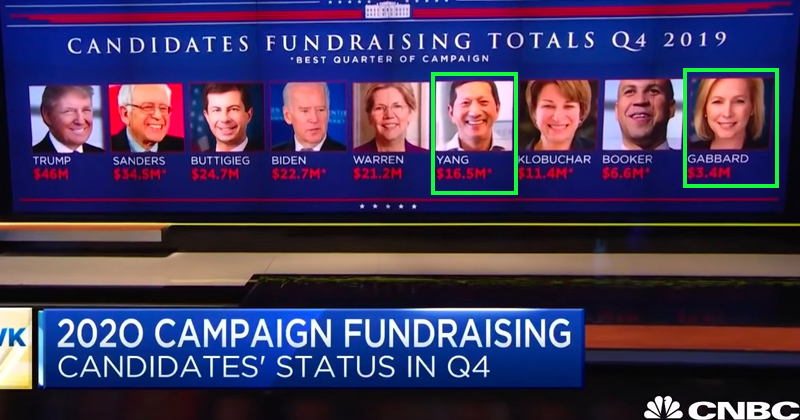 The graphic, aired Monday morning on the Squawk Box program, featured each presidential candidate and their fourth quarter fundraising totals.

Keen viewers, however, spotted embarrassing mix-up in the network’s reporting.

“This actually just happened. This is not fake,” wrote concerned Yang supporter Scott Santens on Twitter.

This actually just happened. This is not fake. Click the link to confirm for yourself. CNBC screwed up the photos for both @AndrewYang and @TulsiGabbard in their reporting of Q4 fundraising totals.

“CNBC screwed up the photos for both @AndrewYang and @TulsiGabbard in their reporting of Q4 fundraising totals.”

In Yang’s place was a photo of Geoff Yang, the founder of a private venture capital firm.

Apparently @CNBC decided they'd use Geoff Yang instead of John Yang this time, I still don't understand why they don't use one of the 5 million Andrew Yang photos on the internet instead of digging around for an alternate Yang everytime a graphic needs to be made!🖕U💩🐦's!!! https://t.co/XTM8gdjzb6 pic.twitter.com/cvHiSZj7Ul

Ummm. This is @geoff_yang and I am NOT running for President. https://t.co/p5VYi85eN8

In Gabbard’s place, a photo of US Sen. Kirsten Gillibrand (D-NY), who dropped out of the presidential race in late August.

The network later issued an apology and showed the correct photos of the candidates.

“Now unfortunately earlier on this network we accidentally aired the wrong photos for both Andrew Yang and Tulsi Gabbard and we apologize for that mistake.”

This isn’t the first time the mainstream media has misidentified Yang.

Last September, MSNBC showed Yang crowdsurfing atop a rally audience, while a lower-third graphic named “John Yang” as the crowdsurfer.