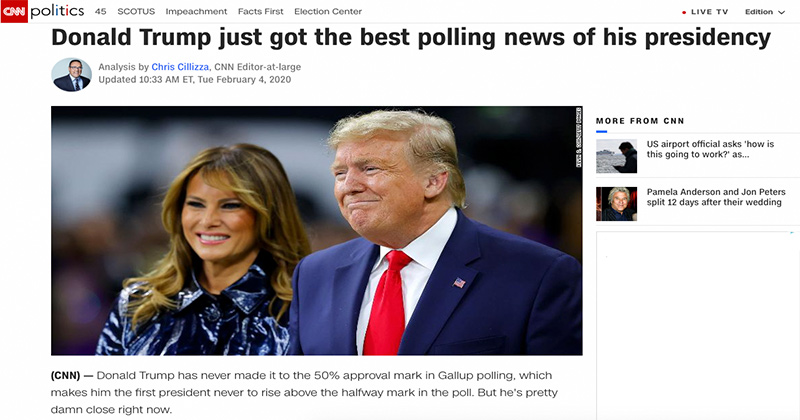 A surprising CNN article titled, “Donald Trump just got the best polling news of his presidency,” admits President Trump is seeing a boost in approval due to the Democrats’ never-ending impeachment witch-hunt.

Released by Gallup on Tuesday, President Trump’s latest approval rating sits at 49%, three percent higher than Obama’s 46% at the same time in his first term.

Keep in mind this is with mainstream media airing 90% negative coverage of the president and the entire establishment working against his every move.

While POTUS continues to poll poorly with Democrats, Independents are coming around.

CNN reports, “His approval among independents in this latest Gallup poll is 42% — up 5 points from where he was among this group in January and tied for his highest mark ever among unaffiliateds.”

The uncommonly honest CNN article ends by admitting Trump is likely to be acquitted in the Senate on Wednesday and that Monday night’s Iowa caucus disaster was another win for 45.

BREAKING: President Trump's Gallup poll approval has climbed 10+ points since the start of impeachment and is now at his record high since he took office