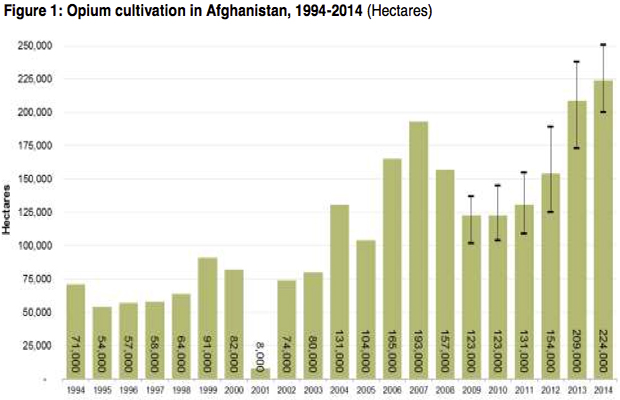 Afghanistan has once again set a new record for opium cultivation despite a constant U.S. military presence for the last thirteen years.

According to a report from the United Nations Office on Drugs and Crime (UNODC), opium production rose for the fourth consecutive year in 2014.

As cultivation and production continued its upward trend, eradication by government forces plunged across the region.

“A total of 2,692 hectares of verified poppy eradication was carried out by the provincial Governors in 2014, representing a decrease of 63% from 2013 when 7,348 hectares of Governor-led eradication (GLE) was verified by MCN/UNODC,” the report says.

Since the arrival of U.S. forces in 2001, Afghanistan’s prominence in the global drug market has skyrocketed. Statistics from the 2014 World Drug Report state that Afghanistan is now responsible for more than 80 percent of the world’s opium, although many believe the number to be much higher.

Despite claims regarding the fight against Afghanistan’s opium scourge, which is directly linked to America’s “nationwide heroin crisis,” multiple U.S. agencies have been found to be directly linked to its skyrocketing availability.

American officials speaking with the New York Times in 2009 revealed that one of the country’s largest heroin dealers, coincidentally the brother of former Afghan president Hamid Karzai, had received regular payments from the Central Intelligence Agency since the beginning of the war.

“The financial ties and close working relationship between the intelligence agency and Mr. Karzai raise significant questions about America’s war strategy…” the article states. “The C.I.A.’s practices also suggest that the United States is not doing everything in its power to stamp out the lucrative Afghan drug trade, a major source of revenue for the Taliban.”

A seperate New York Times report from 2008 also detailed multiple instances in which Afghan troops were ordered to release large amounts of confiscated heroin to Karzai.

“Before long, the commander, Habibullah Jan, received a telephone call from Ahmed Wali Karzai, the brother of President Hamid Karzai, asking him to release the vehicle and the drugs,” the article says.

Although the Obama Administration recently announced the end of the war in Afghanistan, more than 10,000 troops will remain for the foreseeable future as part of a secret extension personally enacted by the President. Continued US control will undoubtedly produce the same results, an explosion of heroin worldwide.