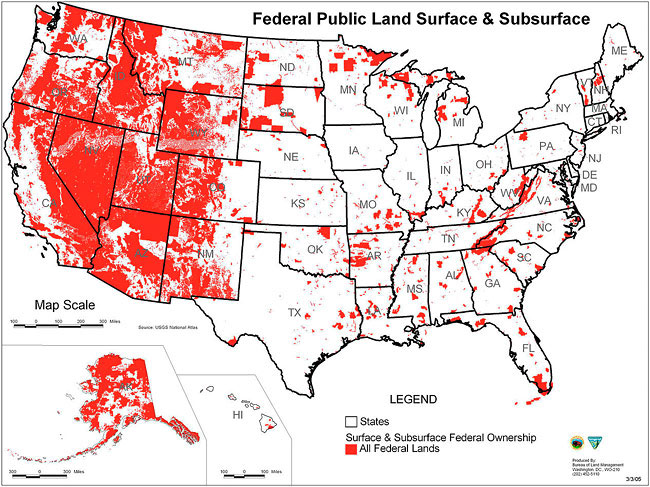 Corporate media coverage of the impending standoff at the Malheur National Wildlife Refuge in Oregon will downplay the underlying issue—the federal government’s claimed ownership in the name of the “people” of nearly 650 million acres of land, almost 30 percent of the area of the United States.

The federal government is not authorized to own land. The Constitution restricts the feds to establishing “Forts, Magazines, Arsenals, dock-Yards, and other Needful Buildings” and reserves for the States the right to own land.

Supporters of large, centralized government argue the massive theft of land is permitted under the Property Clause of the Constitution. “The Property Clause gives Congress the authority over federal property generally, and the Supreme Court has described Congress’s power to legislate under this clause as ‘without limitation,'” concludes the Congressional Research Service, a legislative branch agency within the Library of Congress.

The mention of the Supreme Court refers to a 1911 ruling permitting the federal government to grab large tracts of land as national forests held in the “public interest.”

“The current regime of federal land management is blatantly unconstitutional,” writes the Tenth Amendment Center. “The founding fathers never intended to create a Republic where the feds could impose draconian fees on peaceful individuals and force them from the land. As a matter of fact, that is exactly the arrangement that the Constitution was written to prevent, as it clearly violates the principles of fiduciary government, sympathy and independence.”

Omitted from the discussion playing out in the media is the fact the feds have gobbled up millions of acres of land in Pacman fashion not out of concern for the “public interest,” but for profit and concession to large corporations in control of the legislative, executive and judicial branches of government.

For instance, the states of Colorado, Utah and Wyoming have the largest deposits of shale oil in the world. In addition, the West has an abundance of bauxite, phosphate, trees, oil, gas, clay, fish and is cultivated for a wide variety of agricultural products.

Since 1982, the federal government has leased for oil and gas drilling 229 million acres of public and private land in 12 western states. One of the federal government’s largest sources of non-tax revenue comes from the land it leases to oil, gas and coal companies, The Washington Post notes. Corporations get a stupendous deal from the government, often leasing land at around $2 per acre, a price less than a cup of coffee.

The occupation of the Malheur National Wildlife Refuge center is about the federal government’s unconstitutional claimed ownership of land and the rules it imposes on ranchers (and its effort to drive the few remaining independent ranchers off the land).

The corporate media, however, will continue to minimize this and portray the occupation as an illegal act by gun-toting militias bent on armed confrontation with the federal government. This may sell newspapers and result in web page views, but it does a disservice to the overriding issue—the continued expansion of government and its zeal to abrogate property rights and implement Agenda 21.