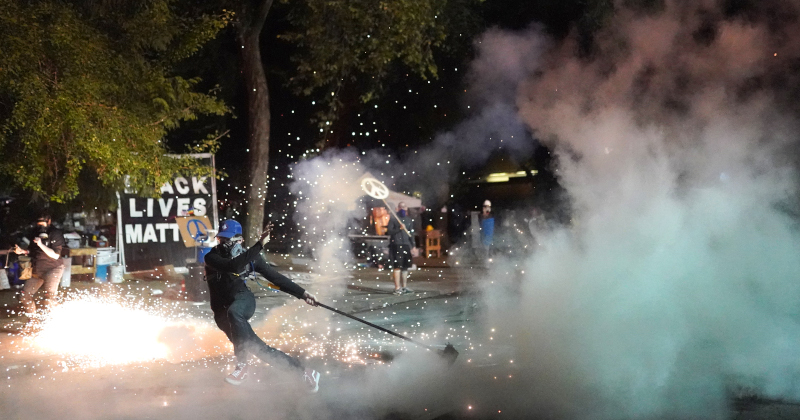 Oregon state troopers have pulled out of Portland, leaving local police to handle ongoing protests in the city soon after the county district attorney said he would not prosecute most of those apprehended amid the unrest.

The move was confirmed late on Thursday by Oregon State Police (OSP) spokesman Tim Fox, who said the department had left Portland after its two-week commitment to defend a federal courthouse in the city ended on Wednesday night.

“At this time we are inclined to move… resources back to counties where prosecution of criminal conduct is still a priority. [Wednesday] night was our last night in Portland,” Fox said in a statement, apparently referring to a recent announcement from Multnomah County District Attorney Mike Schmidt, who said his office would drop most of the 500 or so protest-related cases brought during the recent wave of demonstrations.

In a lengthy press release explaining the decision earlier this week, the DA’s office said it would “presumptively decline” to charge protesters in cases “where the most serious offense is a city ordinance violation or where the crime(s) do not involve deliberate property damage, theft or the use or threat of force against another person.”

Among the offenses listed are disorderly conduct, interfering with a peace officer, criminal trespass, harassment and rioting. Those accused of resisting arrest or assaulting officers, moreover, will only face charges after their case is given the “highest level of scrutiny,” while crimes causing “only financial harm” will be dismissed after victims are provided restitution – which would appear to cover vandalism and looting.

Schmidt’s announcement reportedly stoked anger among OSP officials, according to Reuters, perhaps bolstering the department’s decision to leave Portland in the hands of local police.

The acting head of the Department of Homeland Security (DHS), Chad Wolf, also blasted the decision, saying he was “disappointed but not surprised that Oregon officials would advocate for criminals over the safety of their communities” in a tweet on Thursday night.

State troopers were brought into the city under an agreement reached between the DHS and Oregon Governor Kate Brown in late July, in which the OSP replaced federal police deployed to defend the courthouse amid weeks of chaotic demonstrations.

Authorized by an executive order signed by US President Donald Trump, the federal deployment was harshly denounced by critics, including Governor Brown, who dubbed the officers “Trump’s troops” earlier this week, arguing their presence had only inflamed the unrest.

The protests have raged on despite the federal pull-out, however, frequently escalating into clashes between activists and officers.