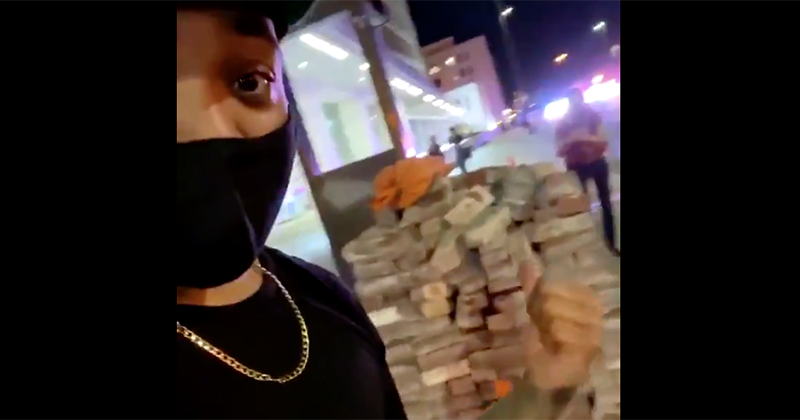 Several videos and pictures of large pallets of new bricks left in city centres throughout the US are fuelling the theory that organised groups are funding the violence that raged throughout the weekend in America.

"Yo, we got bricks. We got bricks!"—#Rioters in Manhattan chanced upon a cache in the street equipped with bricks and a shovel at 10:01 p.m. on Second Ave between St. Marks Pl. and Seventh St. pic.twitter.com/dYB7vHdYqL

So who's donating the pallets of bricks to these riot ravaged areas? Surely there's surveillance footage, and surely they arent being brought in by hand. Start checking camera footage, run license plates. pic.twitter.com/QFHgwHVz0f

Police in Kansas City, Mo., tweeted Sunday that they discovered stashes of bricks and rocks “to be used during a riot”:

We have learned of & discovered stashes of bricks and rocks in & around the Plaza and Westport to be used during a riot. If you see anything like this, you can text 911 and let us know so we can remove them. This keeps everyone safe and allows your voice to continue to be heard.

Black Lives Matter activist *shocked* to find pasty white ANTIFA members infiltrating their cause and committing crimes in the name of their movement.

She calls the cowards out & ANTIFA yell at her!

However, other videos have emerged of ANTIFA types issuing orders to definite non-ANTIFA types to cause trouble:

ANTIFA is a virtually all-white terror organization of cowards who pay minorities to commit their terrorism for them.

This is demonstrated perfectly in the video below.

ANTIFA are the scum of the earth and every one of their members should be in jailpic.twitter.com/s3nyNBvK1x

Former New York City Police Commissioner Bernie Kerik has called for an FBI investigation into who is funding the “domestic terrorism” orchestrated by Antifa and some Black Lives Matter agitators.

“I think the FBI has to investigate, especially this time, [when] you have enormous coordination between what’s going on in Minneapolis, then L.A., Houston, Atlanta,” Kerik urged, adding “There’s a bunch of coordination going on.”

Mr. President @realDonaldTrump… Local, state and federal law enforcement agencies should be investigating who they are, where they came from, who is paying them, as well as looking into their communications networks and who they’re organizing with. https://t.co/M10AOO4ERF

“When you look at some of these people that were in Minneapolis… some of the leaders in the group were young white men all dressed up in black with military-grade radio communications, who were central command posts with earpieces,” Kerik noted.

This is not community unrest or civil disobedience. This is terrorism and the organizers and instigators must be investigated and charged federally. #Antifa #BLM https://t.co/ihofhZD3H1