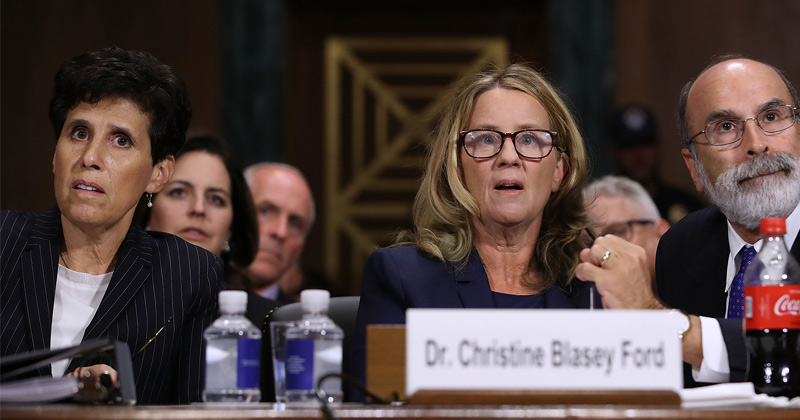 Leland Keyser, who Christine Blasey Ford said was a witness to when Brett Kavanaugh sexually assaulted her in the 1980s, now doubts that it ever happened.

During Kavanaugh’s bloody confirmation in which Ford accused him of sexual assault, Keyser said through her lawyer that while she didn’t refute Dr. Ford’s account, she was also “unable to corroborate it because she has no recollection of the incident in question.”

But now Keyser said she challenges Ford’s accusation entirely, according to the new book The Education of Brett Kavanaugh: An Investigation, a book of which, ironically enough, was apparently intended to keep the accusations against Kavanaugh alive.

“I don’t have any confidence in the story,” she told the New York Times reporters who wrote the book.

Interestingly, Keyser said that, in a group text of Ford allies, she was threatened with being smeared as an addict if she didn’t help Ford, as reported by The Federalist:

An unnamed man on the text suggested that they defame her as an addict. Keyser has been in recovery for some time, as her friends know and as has previously been reported.

[Another] answered, “Leland is a major stumbling block.” While asserting she didn’t want her to make anything up out of whole cloth, she offered ideas for things that could sound supportive of Ford’s story, such as that she’d been in similar situations with Blasey Ford that summer.

“I was told behind the scenes that certain things could be spread about me if I didn’t comply,” Keyser told the reporters, a stunning admission of the pressure to which she was subjected to by Blasey Ford’s allies.

As previously reported in Justice on Trial, Keyser continues to think about the story in which she was supposed to have played a part. She has both “logistical and character-driven” problems with it. Focusing on one of the angles that many women had trouble believing, she says, “It would be impossible for me to be the only girl at a get-together with three guys, have her leave, and then not figure out how she’s going to get home.”

Ironically, this is the book’s major bombshell, even though that’s not what the authors intended.

“Buried at the end of their new book The Education of Brett Kavanaugh: An Investigation, reporters Robin Pogebrin and Kate Kelly quietly admit that Christine Blasey Ford’s lifelong friend Leland Keyser did not believe her friend’s tale of a sexual assault at a party they both supposedly attended,” wrote The Federalist’s Mollie Hemingway. “Keyser was named by Ford as a witness, one of four who denied any knowledge of the event in question.”

“The book offers no evidence in support of the allegations made by Christine Blasey Ford, but, they write, their ‘gut reaction’ was that her allegations ‘rang true.’”

Both reporters have been under intense fire recently after penning a New York Times article claiming that a new accuser witnessed Kavanaugh engaging in sexual misconduct, but left out that the alleged victim denied any memory of it.

“An earlier version of this article, which was adapted from a forthcoming book, did not include one element of the book’s account regarding an assertion by a Yale classmate that friends of Brett Kavanaugh pushed his penis into the hand of a female student at a drunken dorm party,” reads an editor’s note attached to the article. “The book reports that the female student declined to be interviewed and friends say that she does not recall the incident.”

“That information has been added to the article.”