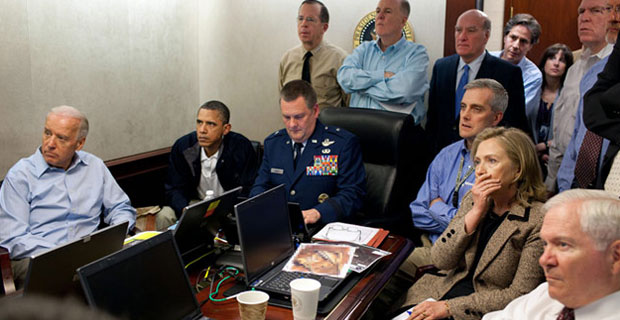 CNN reports al-Qaeda documents, including letters to and from Osama bin Laden, are “part of a trove of many thousands that the SEALs recovered at bin Laden’s compound” after he was supposedly assassinated on May 2, 2011, in Abbottabad, Pakistan.

“It’s long past time for the government to release more of these thousands of captured documents — with any necessary redactions for national security purposes — as they help us to understand better what precipitated the decline and fall of the terrorist group that once dominated the attention of the world, just as ISIS does today,” writes Peter Bergen, CNN’s national security analyst. Bergen is also an adjunct professor at the Paul H. Nitze School of Advanced International Studies at Johns Hopkins University where insiders such as Zbigniew Brzezinski and the neocon Eliot Cohen hold court.

According to Bergen, the CIA effort to spy on Osama bin Laden and al-Qaeda and kill its leaders with its covert drone program was so successful it resulted in substantial operational changes by the group.

“A major theme of the documents is how much punishment the CIA drone program was inflicting on al Qaeda,” Bergen writes.

According to the neocon narrative, the fanatical Sunni Wahhabist Bin Laden and al-Qaeda shared a relationship with Shia Iran. Bergen sticks to the script on this, writing that al-Qaeda “mulled opening an office in Iran,” but decided against this “due to financial costs and other considerations.” Bergen omits mention of the deep animosity between the two religious sects and the fact al-Qaeda declared war on Iranian Shiites, who were called Rafidha, a pejorative term for Shia, by Iraq’s al-Qaida leader Abu Musab al-Zarqawi. This crucial fact is of little concern for an audience awash in years of anti-Muslim propaganda and untutored in historical reality.

The assassination of Osama bin Laden, like many other theatrical presentations associated with the war on terror, is a demonstrable fake.

First and foremost, the government did not provide any convincing evidence that Navy SEALs had killed the former CIA collaborator as widely and bombastically claimed. As noted by Infowars.com and others in May, 2011, the government struggled to cobble together a convincing story. In addition to a shifting, on the fly narrative proffered by the Obama administration, the Pakistanis disagreed with crucial elements of the story.

The most crucial piece of evidence, the body of Bin Laden, was conveniently discarded according to the official narrative. “The alleged body of Bin Laden was hastily dumped in the sea to prevent any proper procedure of identification,” writes Paul Joseph Watson. “The White House claimed this was in accordance with normal Islamic burial rituals, however numerous Muslim scholars all over the globe disputed this claim, pointing out that Muslims can only be buried at sea if they die at sea. While the White House claimed that Bin Laden’s death on May 1st was proven by DNA and facial recognition evidence, such proof was never released for public scrutiny and the Obama administration refused to release photos of Bin Laden’s dead body, suggesting a cover-up.”

Numerous accounts and facts are at odds with the flimsy official narrative — from staged “situation room” photos to neighbors living near the supposed Bin Laden compound in Abbottabad stating they never saw the world-famous terrorist and doubted he lived there.

Osama bin Laden died in 2001. This was reported by Fox News and the corporate media three months after the 9/11 attacks.

“A prominent official in the Afghan Taleban movement announced yesterday the death of Osama bin Laden, the chief of al-Qa’da organization, stating that binLaden suffered serious complications in the lungs and died a natural and quiet death,” the Egyptian newspaper al-Ward reported on December 26, 2001.

Additionally, Israeli intelligence stated Bin Laden had died in late 2001. “The Israeli sources said Israel and the United States assess that Bin Laden probably died in the U.S. military campaign in Afghanistan in December. They said the emergence of new messages by Bin Laden are probably fabrications,” the World Tribune reported in October, 2002.

“You can use this information to evaluate the Obama regime’s unsubstantiated claim that Navy SEALs killed bin Laden in Pakistan a decade later,” writes Paul Craig Roberts.

“Try to identify a single event that the US government has not lied about. Weapons of mass destruction? Iranian nukes? Assad’s chemical attack? Spying on Americans? 9/11? The assassination of President John F. Kennedy? The unemployment rate?”

The same can be said for this latest bit of Osama bin Laden propaganda dutifully reported by the insider Bergen and CNN which, back in the day, served as base for the Army’s Fourth Psychological Operations Group based at Fort Bragg, in North Carolina.