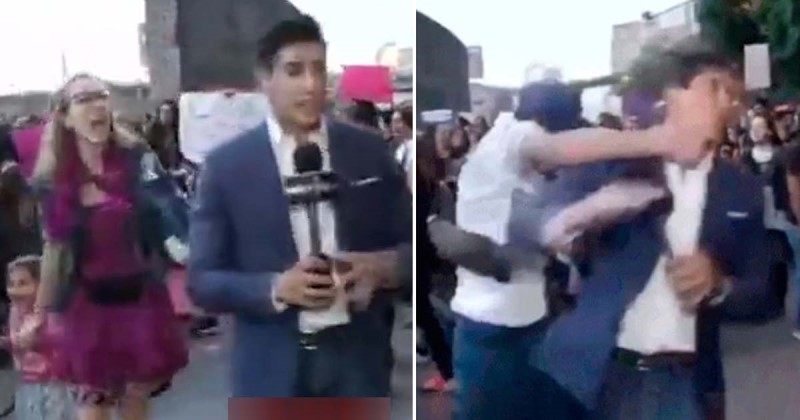 The march was directed towards the city’s police force after officers allegedly involved in a string of rapes were not punished to the satisfaction of the protesters.

In shocking footage from the protest, a reporter from the ADN 40 network named Juan Manuel is seen being attacked by a masked individual before eventually being knocked out by a man who sucker-punches the broadcaster on live television.

He then realized the situation was becoming increasingly dangerous and added, “Right now they are very angry. I’m going to move to a different location,” before being struck with a surprise shot to the jaw.

The aftermath of the brutal attack can be seen below as Manuel regains consciousness:


Following the incident, Manuel was treated at a nearby hospital and after recovering, he tweeted, “Violence will always be unacceptable.”

According to The Sun, a female reporter was “pelted with missiles and shoved by female protesters” during the march.

The reporter, Milenio Televisión Network’s Melissa del Pozo, is heard screaming in shaky footage of her confrontation with the masked feminists.

Mexico City Mayor Claudia Sheinbaum, who is the first woman to be elected as the capital’s mayor, vowed to investigate and bring charges against the attackers.

Portland’s entire police force was on hand to ensure that the march to label Antifa a domestic terrorist organization went relatively smoothly.