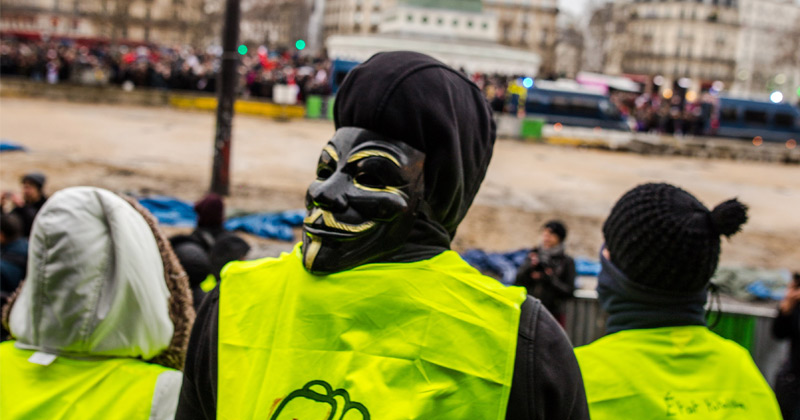 A free speech debate is brewing in France after lawmakers have backed a bill banning protesters from hiding their faces during demonstrations, according to Reuters.

The legislation seeks to make it easier for facial recognition systems to identify rioters, and carries a penalty of up to a year in prison and a 15,000 euro fine.

The “anti-casseurs” (anti-hooligan) bill which is expected to secure approval next week also grants French police greater powers to identify and detain potential troublemakers from demonstrations.

Addressing the lower house National Assembly, Interior Minister Christophe Castaner urged members to “stop the brutes … (who listen) only to their hunger for chaos”.

Opponents of the “anti-casseurs” (anti-hooligan) bill accused the government of impinging on civil liberties, with the debate exposing divisions within Macron’s party, which has a comfortable majority in parliament.

The tactics used by police around the country have come under scrutiny, in particular the firing of “flash ball” riot guns, which have caused serious injuries, including at least one person blinded in one eye.

“We’re not talking about any French citizen chosen at random, we’re talking about those who have hurt others, those who want to kill and destroy property,” Berger told BFM TV on Thursday following the overnight vote.

The anti-mask bill has drawn criticism from the center-left of French politics, with some describing the measures as “authoritarian.”

Charles de Courson, from the centrist UDI party, told parliament the law was extremely dangerous. He said: “It’s as if we’re back under the Vichy regime [the Nazi-collaborationist regime of the 1940s]. You’re presumed to be a résistant so we throw you in prison. Wake up! Wake up, colleagues! … The day you have a different government in power – a far-right government – and you’re in opposition, you’ll see that it’s pure madness to vote for this text.” –The Guardian

The Yellow Vests began protesting in November against a climate change-linked fuel tax, and rapidly evolved into an general anti-Macron movement that has spilled over into several other countries. While the protests have been largely peaceful, there have been incidents of vandalism, looting and violent clashes with police nearly every weekend.

In response to the violence, four key measures contained within the “anti-hooligan” bill have been approved by French lawmakers ahead of Tuesday’s vote on the overall package.

In addition to the ban on wearing a mask or other face covering without justification, a specifically named person can now be prohibited from demonstrating.

Previously, judges could issue such an injunction as part of a case – but the power to ban a person from protesting will now also be granted to regional administrators.

Supporters of this ban say it will only target repeat violent offenders: they must represent a serious threat to public order and have carried out some violent act against people or property.

Another part of the law hopes to make troublemakers financially liable for any property damage they cause. –BBC

Of course, many of the protesters are donning gas masks to protect against tear gas fired by the police. We assume they’ll be prosecuted as well.

A manifesto signed by 30 writers claims that Europe “as an idea” is coming apart as a result of the rise of populism. Is that true? And furthermore, is it accurate to view Europe simply as a set of ideas?