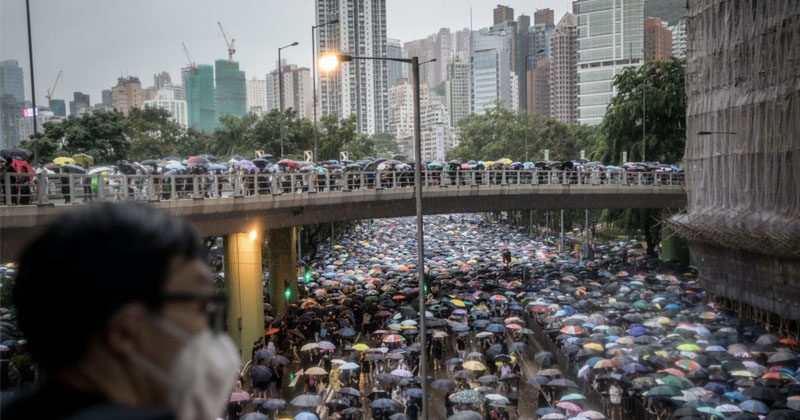 Hundreds of thousands of anti-government protesters joined a mass rally in Hong Kong on Sunday, filling major thoroughfares in heavy rain in the eleventh week of what have been often violent demonstrations in the Asian financial hub.

Sunday’s turnout showed that the movement still has broad-based support despite the ugly scenes witnessed during the past week when protesters occupied the Chinese-ruled city’s airport, for which some activists apologized.

There was an uneasy calm after nightfall, with no violent confrontations and protesters unclear on what would happen next. Police in riot gear checked the IDs of some demonstrators to the west of the Central business district, and there was a large police presence outside the Western District police station.

More than 100,000 people hold another day of pro-democracy protests in Hong Kong, in the face of warnings from Beijinghttps://t.co/unL7SXrTpG pic.twitter.com/NcbC015t0W

“They’ve been telling everyone we’re rioters. The march today is to show everyone we are not,” said a 23-year-old named Chris, who works in marketing and was dressed all in black, including a scarf covering his face and baseball cap.

“Hong Kong people will soldier on.”

Protest organizer Bonnie Leung says protesters won’t stop until their 5 demands are responded to by the government #HongKongProtests #香港 pic.twitter.com/IYOQRdskbV

“It does not mean we won’t keep fighting. We will do whatever is necessary to win, but today we take a break, then we reassess.”

One protester shouted at others who were jeering at police, “Today is a peaceful march! Don’t fall into the trap! The world is watching us,” prompting the group to move on.

Alex Jones breaks down the Communist Chinese invasion of Hong Kong, and the American Flag waving patriots standing up to them.