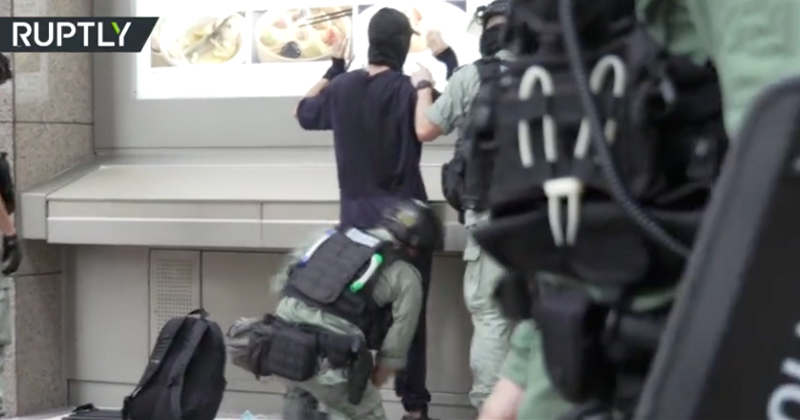 Tensions were high in Hong Kong in the wake of the introduction of a new national security law, with police and protesters clashing and numerous arrests being made, including several under the contentious legislation.

Thousands took to the streets on the anniversary of Hong Kong’s handover from Britain to China in 1997 to decry the new law, which came into force on Tuesday night.

Things quickly got out of hand, with police deploying water cannons, tear gas, and pepper spray against the crowds.

More than 300 people were detained in the city on Wednesday, at least nine of them for violating the national security law, Reuters reported.

One man was filmed crying on the pavement, apparently after being knocked to the ground during the scuffles, while another was seen being held down by security forces.

The first person to be apprehended under the controversial law was holding the black and blue ‘Hong Kong Independence’ flag, which has been outlawed under the new rules.

The protestors believe that the legislation infringes upon Hong Kong’s special status under the ‘one country, two systems’ arrangement with Beijing, and that it was only introduced to crack down on dissidents.

The law makes secession, subversion, terrorism, and collusion with foreign forces offences punishable by life in prison, allows Chinese security agencies to operate in Hong Kong, as well as the extradition of local criminals to the mainland.

Beijing insists that it’s only looking to boost security with the new law, and is backed by the local authorities in Hong Kong, who see the legislation as a chance to restore order in the special administrative region, which has been gripped by pro-independence protests for more than a year now.

Protests in Hong Kong have been fully backed by the West even as they turned increasingly violent and the national security law was blasted by the US, UK, and other countries.

British PM Boris Johnson said that its introduction was “a clear and serious breach” of London’s deal with Beijing, and that he would stand by his pledge to greenlight the path to UK citizenship for owners of British National Overseas (BNO) passports.

Beijing has dismissed the criticism, while warning Western nations against interfering in its domestic affairs.

Tiananmen Square 31 yrs later. What China doesn’t want you to see. For the first time ever, China has banned commemoration of the bloody event. What does that portend for Hong Kong? Will Trump allow wealthy, hardworking communist refugees to come to America?