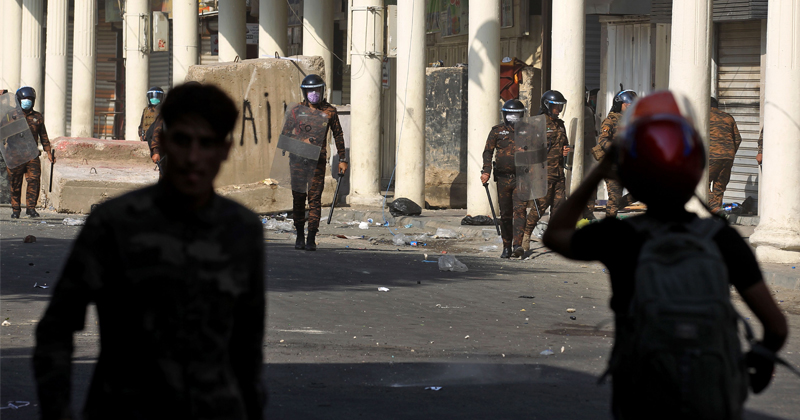 Days into a government ordered internet blackout across much of the country, Iraqi security forces are in the midst of a new major crackdown on massive protests which have gripped the nation for over a month.

In the past days it’s been marked by use of live ammunition, increasing arrests, and cutting off protester communications; however, these heavy-handed tactics and new violence appear to be having little effect on slowing the demonstrators’ momentum.

Already on Thursday, four protesters have been shot dead in central Baghdad, Reuters reports, with 35 wounded as the crowds battled with police to seize and occupy Shuhada Bridge in the capital. Other regional media have counted at least 13 killed since Tuesday.

In total the unrest has claimed over 250 lives and 10,000 or more wounded throughout the whole of the protests, according to most estimates.

Prime Minister Adil Abdul Mahdi now appears ready to use any means necessary to crush the protests, which have been largely driven by popular anger over corruption, failing public services and infrastructure, as well as fear of undue Iranian foreign interference in the government and military.

November 6th 2019, 4:15 pm.
Risafi
I waited to verify this video before posting. As much as I hate posting such videos, but documentation is necessary.
A protestor is wounded due to live ammunition. #iraqProtests pic.twitter.com/odFmv06ay6


One prominent Middle East publication cited an unnamed Iraqi intelligence official to say Mahdi has now vowed to “completely destroy the protesters,” and that he’s given “free rein” to the security services to “dismantle the protesters and clear them from the buildings and the bridges.”

However, public statements by the military this week have contradicted this account, with top spokesman Major-General Abdul Karim Khalaf announcing to reporters on Wednesday, “To avoid any confusion, clear and strict instructions have been handed down that no live ammunition be used. Orders have also been given not allow any live ammunition on the scene [of protests],” according to Al Jazeera.

Meanwhile Grand Ayatollah Ali Sistani, in a rare instance of addressing political affairs in the country, previously urged “restraint” on the part of security forces and protesters, calling for authorities to avoid violence in disbanding the crowds.

The Iraqi and Lebanese people want their countries back. They are discovering that the Iranian regime’s top export is corruption, badly disguised as revolution. Iraq and Lebanon deserve to set their own courses free from @khamenei_ir's meddling.


Analysts have feared we could be witnessing the early phases of a Syria-style sectarian proxy war emerging, also given the United States has begun to go all in politically on the side of the protests.

Early this week Secretary of State Mike Pompeo provocatively stated that Baghdad is essentially under the thumb of the Iranian clerics, and said “The Iraqi and Lebanese people want their countries back.”