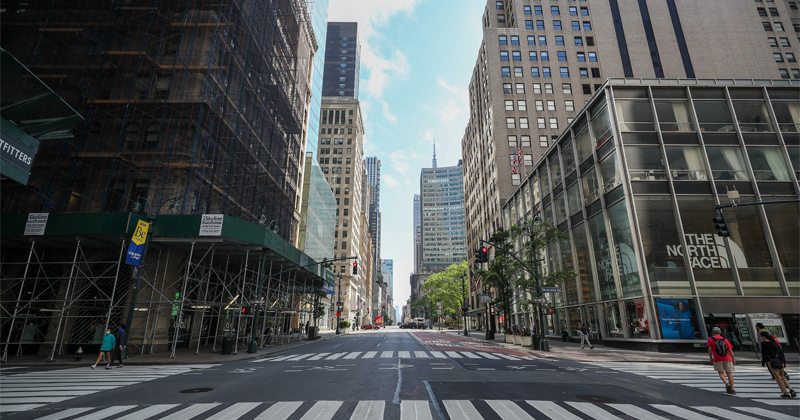 There seems to be mounting optimism that the US economy will rebound relatively quickly as states begin opening up and there is progress toward a coronavirus vaccine.

But the optimism ignores deep problems in the US economy the existed before the pandemic  – chief among them staggering levels of debt and the proliferation of zombie companies.

In the last couple of years, corporate debt has blown through the roof. So much so that the Federal Reserve issued warnings about the increasing levels of corporate indebtedness late last year.

The government shutdowns in response to COVID-19 have only exacerbated the problem. The Federal Reserve’s prescription has been to encourage even more borrowing. Companies have obliged. As Bloomberg recently reported, “many of the companies hardest hit by the coronavirus outbreak have priced billions of dollars of bonds and loans in recent weeks.”

“Never mind that profits have been wiped out, and that their business operations aren’t viable right now or likely anytime soon. As long as they’re propped up by the Fed, investors are willing to lend.”

Analysts say net corporate debt issuance could approach as much as $1 trillion this year. And according to Bloomberg, creditors are also waiving or loosening financial markers on existing debt, allowing companies to kick payments on current debt down the road.

This raises the specter of defaults and bankruptcies in the future.

Howard Marks, co-chairman of Oaktree Capital Group, told Bloomberg TV that there will be plenty of debt defaults and bankruptcies when corporate borrowers start running out of cash in the months ahead.

“There are large, highly levered companies and investment vehicles that the government and Fed rescue program is not likely to reach and take care of.”

Even the companies that do get “taken care of” may well find themselves in dire straights when the debt payments come due.

It’s the march of the zombie companies.

A zombie company’s operating profits can’t cover even the interest payments on its debts, much less repay the principle. According to the Bank of International Settlements (BIS), the number of zombie companies was already above pre-2008 crisis levels in the spring of 2018.

This has important implications for the labor market. Millions of Americans have lost their jobs in the last nine weeks. Even with optimism about the economy opening up, companies have continued to shed jobs. Another 2.4 million Americans filed jobless claims last week. In just nine weeks, 38.6 million people have filed for initial unemployment aid. That’s 23.7% of the March US labor force. Peter Schiff asked the operative question during a recent podcast: why are we still losing millions of jobs if we’re close to turning the economy back on.

“Wouldn’t some of these companies be getting a jump on it? Wouldn’t they be bringing back some of their workers? Or at least stop laying them off? The fact that we can still keep losing jobs by the millions in the span of a week just shows you that we’ve got a lot more to this downturn than people think.”

And when these zombie companies start going under, it will mean even more lost jobs.

According to a CNBC report based on data from Arbor Research, zombie companies control more than 2 million jobs.

Despite the fact that many of these companies were already leveraged to the hilt, the coronavirus crisis has made it easier for them to take on even more debt. As a result, their stock prices have rebounded aggressively.

This hints at the disconnect between the stock market and the actual economy. These companies are no sound, but investors assume they will be fine because the central bank is backstopping them. According to CNBC, were it not for the Fed, a lot of these companies would have shuttered already.

Even if the massive Fed intervention keeps some of the zombies alive, some analysts think it will still put a drag on the economy. Deutsche Bank’s Torsten Slok told Bloomberg, “The Fed and the government are interfering in the process of creative destruction,” and he warned that it could weigh on the overall potential for growth of the economy and on productivity.

“You are misallocating capital to businesses that are not productive and in some sense taking resources away from companies that have high growth.”

The bottom line is that the Federal Reserve and the US government are playing a massive game of kick the can down the road. The zombies will limp along for a while, but eventually, many will succumb to the inevitable and go belly-up. That will mean more job losses and an even bigger drag on a struggling economy. The scenario was already in the cards. Coronavirus has sped up the process.