HAITI – For several weeks, armed groups of young black men, presumably Haitian and too young to be veterans of the Haitian Armed Forces (Forces Armees d’Haiti, FAd’H) disbanded in 1995, have been parading in military fatigues through Haitian towns. Some politicians and the Haitian press have been calling these men “former soldiers.” For the sake of accuracy, let us forgo this awkward and unfounded label and call them “men” or “gangs.” These marching men claim they want to enforce respect for the national sovereignty and get their back pay. One suspects their priorities are reversed. 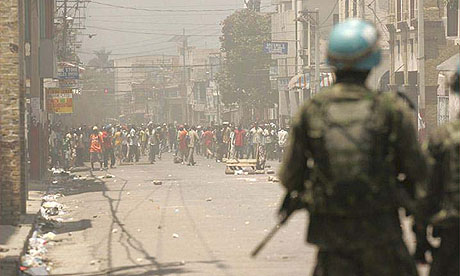 These gangs have been around for months, but their more public appearances immediately followed massive demonstrations on February 29 to commemorate the 2004 coup against Aristide. The march had been organized by a new party of Lavalas supporters called “Ghettos-Unis” (United Ghettos). Over 10,000 people marched through Port-au-Prince chanting:

“Yes to democracy, no to reinstatement of dictatorship!”

“Intimidations will not make us back down! We don’t need your motorcycles, give your passport instead!”

with reference to Martelly’s refusal to deliver his passport to a Senate Committee investigating the citizenship of various government officials.

The appearance of the armed gangs has coincided with a rash of murders by gunfire. At least three members of the Haitian National Police (PNH), one lawyer and a well-known painter were killed this month (March 2011), but the most famous victims of the crime spree have been Jean Liphete (Ti Lifet) Nelson and Jean-Baptiste Jean-Philippe (Samba Boukman), both politically outspoken Fanmi Lavalas members and accomplished individuals who could probably have qualified for political office if this had been their ambition.

Unlike many of Haiti’s top politicians of dubious citizenship, Ti Lifet was born in Cite Soleil in 1974 and lived there all his life. He initiated among many things, Cite Soleil’s Radio Boukman which he was running, along with other projects that provided schooling for children, hot meals for elderly poor, and mobile clinics for the sick. He was loved and widely respected.

Samba Boukman was a charismatic musician and militant who is best known for having helped to broker a truce between the poor neighborhood of Bel-Air’s armed Lavalas partisans and the UN, when MINUSTAH was randomly blasting these neighborhoods with gunfire from tanks and helicopters after Aristide’s removal.

In addition Reginald Antoine, a labor leader and Director of Platform for Workers Unjustly Fired from Public Administration (Plateforme des Employés Injustement Révoqués de l’Administration Publique, PEVEP) had his entire entire family (sister and brother in law, and two children 2 and 10) killed by explosives on March 13 (AHP). Members of PEVEP had been protesting and demanding the benefits associated with their severance.

Understandably, Haitians have focused on the terrible loss of life this month, but sadly, cries of “insecurity” play into the hands of MINUSTAH, which now exists merely to continue itself as part of the growing cancer of the UN “peacekeepers” and wants, more than anything, to renew its mandate. Despite the UN’s record of rapes, child prostitution, trading of food for sex, and killings by gunfire and cholera, this organization still claims to be indispensable for safety and democracy in Haiti.

It is worthwhile to consider how the new armed gangs are supported. Their training camps have been photographed in the Haitian countryside by the western press since before Martelly’s inauguration. The sources of weapons and training may be reasonably guessed because, after all, the U.S. publicly promised to sell arms to Haiti for its presumed drug war, and France formally pledged to train Haiti’s new army (right after Haiti promised to relax its adoption policy). Both of these “friends” of Haiti also wield considerable influence in the UN. So it is hardly worthwhile to entertain some notion that MINUSTAH and the new gangs might somehow be at odds with each other. In fact they reinforce each other: the presence of MINUSTAH is proffered as the reason a “Haitian army” is needed to protect the national sovereignty, and the threat of  paramilitaries is used to justify MINUSTAH’s continued stay in Haiti.

Leaving MINUSTAH aside for now, a more productive line of thinking is to consider that, although weapons and uniforms make for a good show, these are not all an army needs. Given that even in the best cases, armies are parasitic on a population, how does this mysteriously emergent paramilitary force get its meals, water, board, and clean clothes? After all, back when the army was disbanded in 1995, its 7,000 soldiers had been consuming 40% of Haiti’s national budget.

Reports of appropriations of government buildings by the armed gangs have become common. Their speaker, a man called Larose Aubain, circulates freely and communicates with officials of the executive branch.  For example, in an AHP report of February 27, Aubain claimed that he and his colleagues had conferred with the Minister of Defense. In the same report Aubain vowed that the gangs would occupy all the former FAd’H bases until the army’s restoration.

On the evening of Monday March 19, about 50 armed men in military fatigues took over Cap Haitien’s Northern Province Agriculture Department building: a structure that had been vacated by the FAd’H and replaced by government offices since 1995 (AHP Mar 20). In the fashion of Duvalier’s Tontons Macoutes, who were formally known as the Volunteers for National Security (Les Volontaires de la Securite Nationale, VSN), the new gang of armed men are getting their livelihood, including food, entirely by extortion from the city’s municipal authorities. Other groups are likewise getting supported elsewhere in the country as they occupy government buildings that were once FAd’H bases.

Asked how he would rid the city of the gangs, Yvon Alteon, the Presidentially appointed delegate for the northern region replied that the problem must be handled at the highest level, and anyway the men should not be feared because they’ve promised to “behave themselves.”

A week earlier Martelly had responded to similar questions by saying that there would come a more propitious time for the armed men to serve their country and advising them to be patient, get out of their uniforms and put down their weapons within a week. After this “ultimatum” expired, Secretary of State for Public Safety, Reginald Delva, reported that,

“Following an agreement with the authorities, these citizens will not be forced to vacate the premises, but will not, for now, circulate in military uniform and with weapons.” (AHP Mar 16).

Again, the repetition that these are merely young Haitians who have an inordinate zeal to serve their country and are in need of a change of clothing. Mr. Delva added that negotiations were continuing as the government inventories “the human resources” at the camps.

For its part, MINUSTAH announced, through Information Officer Eliane Nabaa, that UN “peacekeepers” are ready and able to disarm and dislodge the paramilitaries but will not do so without first getting a request from the Haitian National Police (PNH) (AHP Mar 20).

Thus the PNH, which is hardly perfect but nevertheless the only legitimate armed force currently on Haitian soil, finds itself in a quandary. On one hand, it lacks the resources to oppose the armed gangs that are fanning themselves throughout the country; on the other hand, MINUSTAH is the last organization from which the Haitian police would seek assistance. MINUSTAH soldiers, who earn over US $6,000 per month, are deeply resented by the poorly-paid Haitian police officers. Moreover, MINUSTAH troops have preyed on Haitian police — particularly those in the poor neighborhoods — as they have the rest of the population. For example,

By far the most serious consequence of inviting MINUSTAH to help confront “the insecurity problem” would be to buttress the UN’s arguments for renewal of this force, although the great majority of the population despises it, and the Haitian Senate has formally approved a resolution calling for the UN soldiers to depart by October 2012.

Member of the Lower House of Parliament Ronald Lareche, who sits on the Justice and Public Safety Committee, commented that MINUSTAH ought to fulfill its supposed mandate of strengthening democracy, rather than do nothing but watch paramilitary gangs, which are an obvious departure from democracy, train in the country in full view of everyone.

In addition, Mr. Lareche called for Director of National Police Mario Andresol to take drastic action against any member of the police who disregards his orders. This apparently had the effect of immediately causing rumors to start to fly about heads rolling at the NPH.

Suddenly this week Port-au-Prince police is calm, with a single buglary as its most serious crime in one 72-hour span. Suspects in the assassination of Ti Lifet and the killing of a police officer have been arrested. Departmental Director of Western police Michel Ange Gideon attributes this turnaround to the implementation of “Boukle Port-au-Prince” (Buckle Port-au-Prince), a program that combines a heavy police presence together with road blocks of the city’s major arteries, where random searches are conducted. There is now talk of extending this program for a month.

However long Boukle Port-au-Prince lasts, it is unlikely to bring relief to cities like Cap Haitian that are under predation. But our Haiti is another place with a bad case of post-colonialitis: a disease that causes people to believe that their capital city is the only place that matters, though it is merely a port from which wealth is removed. Those who neglect to treat this disease do so at their own risk.