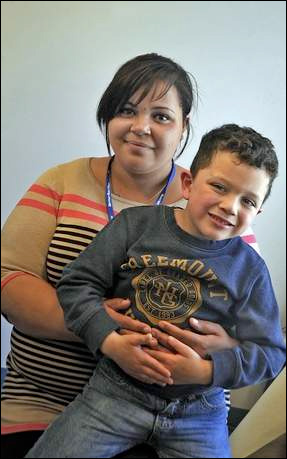 The parents of a special needs student at a school in New York were upset to learn their child was shackled at the feet, handcuffed and transported for a psychiatric evaluation after he threw a tantrum in school last week.

According to state troopers, five-year-old Connor C. Ruiz was “combative” and “out-of-control” on Wednesday and required a team of educators and law enforcement personnel to restrain him.

When mother Chelsea Ruiz arrived at the Samaritan Medical Center, where Connor was taken after his outburst, she found her five-year-old son with a “big scratch on his neck” and “marks on his wrists.”

“An officer told me they had to handcuff his wrists and ankles for their safety,” Chelsea told The Watertown Daily Times. “I told him that was ridiculous. How could someone fear for their safety when it comes to a small, 5-year-old child? He said that he understood because he had four children of his own.”

Chelsea and her husband Ryan also say the school didn’t ask for their permission to transport Connor to the hospital, even though school records say the father “OK’d the transport.”

The parents were also upset to learn police did not place Connor in a booster seat when they transported him, as required by law.

“If an accident happened, my son had no way of protecting himself because his hands and feet were bound,” Chelsea lamented.

In the end, the mother says hospital workers assessed there was nothing wrong with her son.

“The doctor who decides whether a person needs to see the psychiatrist decided he was just being a boy and threw a tantrum,” Mrs. Ruiz said.

But police insist their torturous methods were necessary.

School officials say they attempted to calm the special needs student for two hours to no avail and proceeded to physically restrain him until police arrived.

One New York state trooper told The Times Connor was “screaming, kicking, punching and biting” when they arrived, and “was jumping from cabinets and desks, was attempting to jump out of a window… he was stabbing himself with pencils and eating paper.”

Additionally, troopers say Connor had bit off a foam mat “and tried to cause himself to choke” before a school nurse removed the piece.

Connor was restrained “because he was attempting to kick and be physically combative,” public information officer Trooper Jack Keller stated.

To the booster seat concern, police claimed “car seats aren’t required in emergency vehicles because they are exempt from seat belt laws.”

The Ruiz family says they will be pursuing legal compensation for “emotional distress, child cruelty and endangerment for cuffing his hands and feet,” and that Connor “won’t be returning to a public school at Indian River.”