Abdelhamid Abaaoud (aka Abu Umar Al-Baljiki) slipped past the mightiest intelligence agencies in the world despite a feature in the February, 2015 issue of the Islamic State magazine Dabiq. 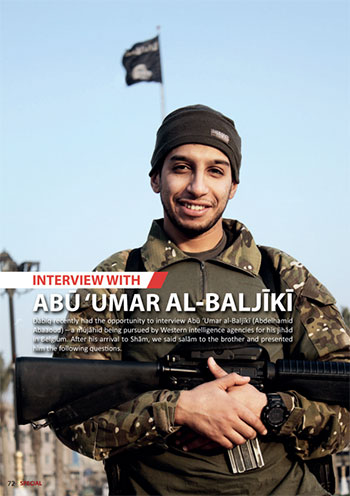 Abaaoud is the key suspect in the Paris massacre last Friday that claimed the lives of nearly 130 people. He is a Belgian Moroccan and the leader of the so-called Verviers cell. Two members of the terror cell, Abuz-Zubayr al-Baljiki and Abu Khalid al-Baljiki, were killed by Belgian police on January 15, two weeks after the Charlie Hebdo attack in Paris.

In the Dabiq interview Abaaoud claims he traveled with his accomplices to Europe “in order to terrorize the crusaders waging war against the Muslims.” He said Belgium was a target because the country “is a member of the crusader coalition attacking the Muslims of Iraq and Shām [Syria].”

Despite difficulties during the trip to Belgium, the three terrorists “were then able to obtain weapons and set up a safe house while we planned to carry out operations against the crusaders.”

Abaaoud mocked European authorities for failing to recognize him. He said he was stopped by police after the Verviers raid, but they were unable to match him to a photograph.

“I was even stopped by an officer who contemplated me so as to compare me to the picture, but he let me go, as he did not see the resemblance,” he said.

“Allah blinded their vision and I was able to leave and come to Shām despite being chased after by so many intelligence agencies. All this proves that a Muslim should not fear the bloated image of the crusader intelligence. My name and picture were all over the news yet I was able to stay in their homeland, plan operations against them, and leave safely when doing so became necessary,” he said.

Officials are likely to chalk the incident up to police incompetence and another intelligence failure. Such missed opportunities and instances of known terrorist suspects slipping under the wire—despite billions of dollars spent annually on police and intelligence services—raises interesting questions.

Either law enforcement is hobbled by bureaucracy and red tape or something else is at work.

Namely: Abaaoud and his fellow terrorists were allowed to enter Europe, travel freely and engage in horrendous terror attacks because increasingly brutal  terror attacks targeting innocents feed into a larger geopolitical strategy. The strategy is outlined in recently declassified DIA documents calling for a radical Wahhabi principality in the Middle East. For this to occur, Bashar al-Assad must be removed from power. This will be accomplished under the pretext of fighting the Islamic State in Syria.

Back-to-back terror attacks will also support the argument the NSA surveillance gird—currently under threat—not only be continued but significantly expanded. It is no mistake the NSA, CIA, FBI and other law enforcement and intelligence agencies claim the Paris terrorists used encrypted technology during the attack.