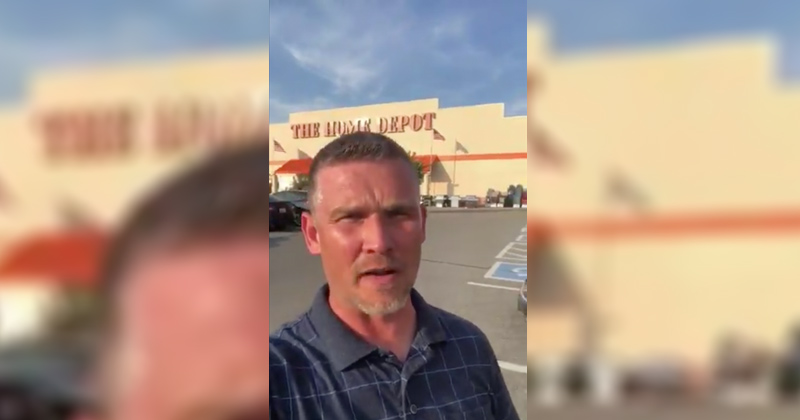 A Tennessee pastor delivered a passionate rebuke of the leftist freakout on Home Depot.

My local HomeDepot was 2nd on my list of most visited stores behind Target. Third was IKEA (still suffering flashbacks from that)

Cutting up my card and never shopping there again. #BoycottHomeDepot https://t.co/HqYzWSHPuE

In an impassioned minute-long tirade, Pastor Greg Locke of the Global Vision Bible Church predicts Home Depot will continue to thrive in the face of protests from leftists, which he notes probably don’t even shop there.

Here’s what I think about the stupid #BoycottHomeDepot deal. GOD BLESS AMERICA!!! pic.twitter.com/APWQy1zyb6

“First of all, Donald Trump is going to win by a landslide with or without Home Depot money,” Pastor Locke begins his fiery rant.

“But I appreciate people that can’t be bullied into the corner of silence by people that want to threaten them and boycott them.”

“Their entire brand is on building stuff – the people that would believe in the hashtag #BoycottHomeDepot have never built one thing in the entirety of their life.”

Others on social media also pointed out liberals boycotting the store have probably never set foot there – except of course for Antifa.

A bunch of people who've never used a screwdriver are boycotting Home Depot, which is kind of like me boycotting a yoga studio

I love how liberals are trying to boycott a store we all know they never go to. 😂

The only liberals who shop at hardware stores are members of Antifa.#BoycottHomeDepot

99.9% of these people tweeting #HomeDepotBoycott have never even set foot inside of a Home Depot.

If you think your hurting the owner of home depot … I’d think twice you idiots.. he’s already made it.. your just hurting the people working there.. but again… dems don’t really care about anyone other than themselves #HomeDepotBoycott

Things are looking up for Home Depot! That Chick-fil-A boycott was great for business. #HomeDepotBoycott pic.twitter.com/ss9VrBeVgf

Marcus told the Atlanta Journal-Constitution last month he plans to donate to Trump’s re-election campaign because America’s better off than it was six years ago.