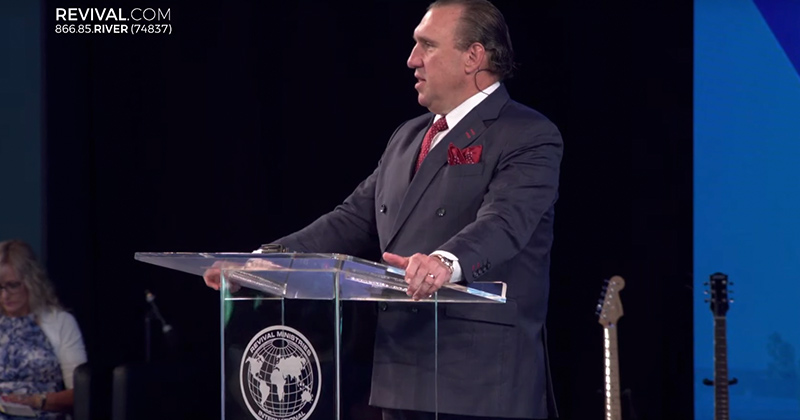 A Tampa Bay, Florida pastor who refused to comply with the Hillsborough County “Safer at Home” order has been arrested after hosting thousands of worshippers at The River Church on Sunday.

Pastor Rodney Howard-Browne was charged with unlawful assembly and violation of public health rules after disobeying the county’s social distancing orders and turned himself in to a Sheriff’s office on Monday.

The county’s order went into effect on Saturday, outlawing gatherings of 10 or more people and mandating citizens keep 6 feet away from each other.

However, Howard-Browne has been an outspoken critic of “social distancing” and refused to close his church.

The pastor is also an ally of President Trump and has appeared on The Alex Jones Show numerous times.

See footage of The River’s Sunday, March 29th service below:


Explaining the decision to remain open during the county’s “stay at home” order, the pastor wrote, “In a time of crisis, people are fearful and in need of comfort and community, more than ever before. Even people who do not attend church regularly, or perhaps never go to church, need to know that there is somewhere for them to go when they need help.”

Speaking at a press conference, Hillsborough County Sheriff Chad Chronister condemned Howard-Browne, saying, “His reckless disregard for human life put hundreds of people in his congregation at risk, and thousands of residents who may interact with them this week, in danger.”

A state attorney confessed he hopes the pastor’s arrest will serve as an example to others considering dissent.

“Where people are refusing to obey law enforcement in this regard you risk being arrested and prosecuted,” Andrew Warren said.

In the following video, Howard-Browne details his decision to remain open, citing the U.S. Constitution and religious freedom.

“Not only does the First Amendment give me the right to speak freely, it also gives the right for peaceful assembly and to practice religion freely,” he explains.