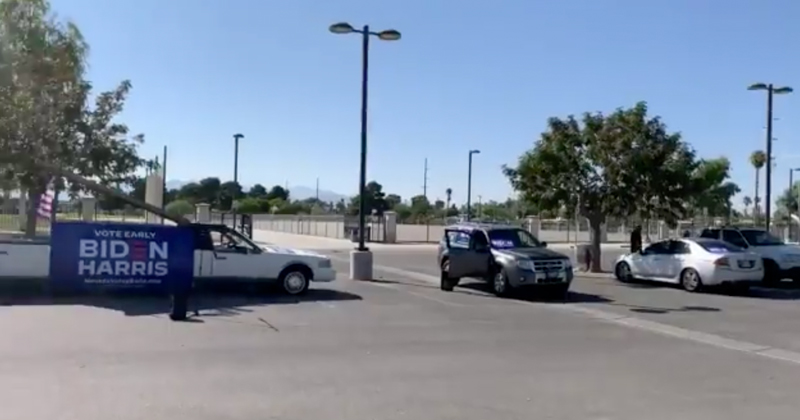 A parade this past weekend held by Latino supporters of Democrat presidential candidate Joe Biden failed to materialize.

Videos of the underwhelming event held at Freedom Park show few supporters showed up to a car parade for the Biden-Harris ticket, an illustration of the campaign’s lack of enthusiasm.

I’m here at Freedom Park, where a handful of Joe Biden supporters are preparing for a car parade down Las Vegas Boulevard to Trump International Hotel.

President Donald Trump is hosting a Latinos for Trump round table at Treasure Island today. pic.twitter.com/vhfUW4Tr1X

“A handful of cars have gathered for the parade, decked out in signs, flags and car paint,” one Vegas journalist attending the event reported via Twitter.

A handful of cars have gathered for the parade, decked out in signs, flags and car paint. pic.twitter.com/rSd8XBQBcl

The embarrassing turnout shows the Biden campaign is failing to muster support from Hispanics, despite incessant mainstream media rhetoric to the contrary.

On Sunday, President Donald Trump acknowledged support from the Hispanic electorate during his rally in Henderson, Nevada, Sunday attended by over 25,000 people.

Meanwhile, Latinos for Trump organized a massive caravan in Miami, Florida, Sunday in support of the president.