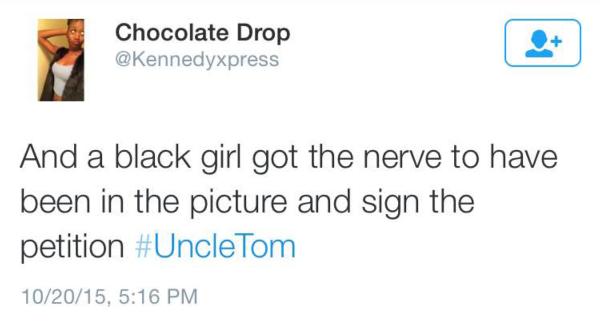 Leftist activists are calling for the removal of a Thomas Jefferson statue because they claim it’s “racist” and “sexist.”

Feminists and #BlackLivesMatter protestors had previously defaced the statue at the University of Missouri using post-it notes with the phrases “Racist,” “Rapist,” and “Slave Owner.”

Now they’re lashing out at students who hosted a “Stand With Jefferson” rally in support of the statue.

“…A black girl got the nerve to have been in the picture and sign the petition #UncleTom,” Kennedyxpress said in a tweet targeted at Jasmine Wells, an African-American who posed with the statue in a picture. 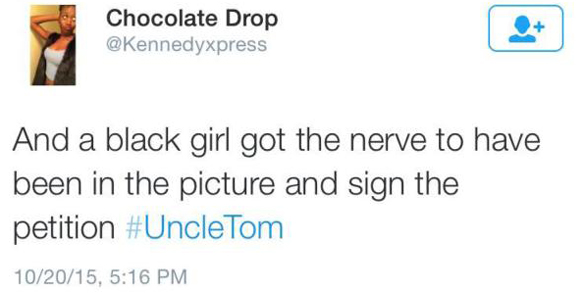 Wells responded by stating her political beliefs should not be determined by her race.

“For a movement that wants to end racism on campus, their response to the event and my participation in it, I felt, was very racist and hurtful,” she told Campus Reform’s Chris Nuelle.

Another Twitter activist, joviallie, claimed the students were “fighting for a slave-owning rapist’s statue instead of fighting for the actual rights of actual people on campus,” a strange statement considering that Thomas Jefferson was the mastermind behind the Declaration of Independence and other documents which cemented human rights and freedoms.

And a self-described “radical feminist” declared “our Founding Fathers are a symbol of racism, genocide and colonization.”

“It’s more than just a statue, it’s a symbol of racism, genocide, colonialism and sexism,” she tweeted.

Fortunately a counter-movement to keep the statue on campus gathered more signatures than the petition to remove it.

“Mizzou was the first university built within the Louisiana Purchase and the quad was literally modeled after Jefferson’s design for the University of Virginia,” Tristan H. pointed out in the “Stand With Jefferson” Facebook group. “So what do they want next? Should the university also change the design of the quad because that is apparently offensive and ‘creating an unwelcoming environment.'”

CNN had similarly attacked Thomas Jefferson during the purge of the Confederate flag this past summer by suggesting the Jefferson Memorial should be removed next because it isn’t “politically correct.”