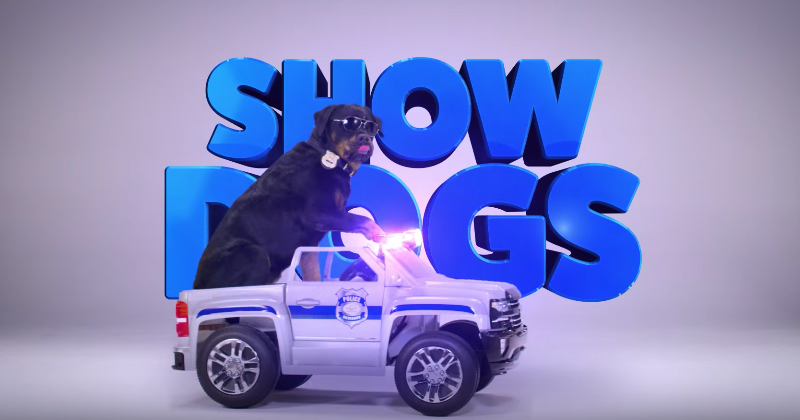 The studio that produced the film Show Dogs pulled the movie and re-edited it earlier this week over allegations it sexualized children.

In a stunning about-face, the PG-rated film, which hit theaters May 18, underwent revisions after bloggers pointed out it absurdly promoted allowing strangers to touch one’s genitals.

The movie centers around talking dogs, with one tough street dog, Max (voiced by rapper Ludacris), infiltrating a dog show to help locate a missing panda.

Writing for the Macaroni Kid blog, Terina Maldonado had the viral breakdown that turned heads after she took her family to watch an advance screening.

What could have been solely a fun movie for kids that would get my highest recommendation is damaged by a dark and disturbing message hidden, not so subtly between the fluffy dogs and glamorous parties of the show dog lifestyle. As part of any dog show, contestants are judged on their abilities and physical attributes. One part, in particular, is the inspection of the dog’s private parts. Being that Max is new to competing, he needs to learn the process so his partner, Frank, along with a former show champion work to get him ready for the final round of the competition. Since the inspection of the private parts will happen in the finals, Frank touches Max’s private parts to get him use to it. Of course, Max doesn’t like it and snaps at Frank for him to stop. Max is then told by the former champion, who has been through the process before, that he needs to go to his “zen place” while it happens so he can get through it. More attempts are made by Frank to touch Max’s private parts, but Max is still having trouble letting it happen and keeps snapping at him.

The day of the finals come and if Max doesn’t let his private parts be touched, he may lose the competition and any hope of finding the kidnapped panda. It all rests on his ability to let someone touch his private parts. The judge’s hands slowly reach behind Max and he goes to his “zen place”. He’s flying through the sky, dancing with his partner, there are fireworks and flowers-everything is great-all while someone is touching his private parts.

Maldonado says she, her husband and mother all picked up on the movie’s not-so-hidden message, but was surprised when her daughter said her favorite part was when Max had his privates touched and went to his “zen place.”

“With the #MeToo movement and all the talk of sexual predators in Hollywood, I couldn’t help but think this message, that is blatantly in the open for adults to see, but over a child’s understanding, is meant to groom children to be open to having people touch their privates, even though they don’t want it,” Maldonado wrote in the blog posted Sunday.

Following Maldonado’s post and critiques from other parenting blogs, the National Center on Sexual Exploitation released a statement taking Show Dogs and its producer Global Road Entertainment to task.

The film, they said, “sends a troubling message that grooms children for sexual abuse… It contains multiple scenes where a dog character must have its private parts inspected, in the course of which the dog is uncomfortable and wants to stop but is told to go to a ‘zen place.’ The dog is rewarded with advancing to the final round of the dog show after passing this barrier. Disturbingly, these are similar tactics child abusers use when grooming children—telling them to pretend they are somewhere else, and that they will get a reward for withstanding their discomfort. Children’s movies must be held to a higher standard, and must teach children bodily autonomy, the ability to say ‘no’ and safety, not confusing messages endorsing unwanted genital touching.”

On Tuesday, Global Road released a statement saying they accurately portrayed what goes on at a dog show, and did not intend for the film to send a sexual message to children.

The next day Global Road announced it was pulling the film and re-cutting it to remove the offensive scenes after a theater in Australia pulled the movie:

Responding to concerns raised by moviegoers and some specific organizations, Global Road Entertainment has decided to remove two scenes from the film ‘Show Dogs’ that some have deemed not appropriate for children… The company takes these matters very seriously and remains committed to providing quality entertainment for the intended audiences based on the film’s rating.”

The re-edit was hailed as a huge victory for child abuse and exploitation advocates.

Here’s a trailer for the film, which does not include the disturbing content: