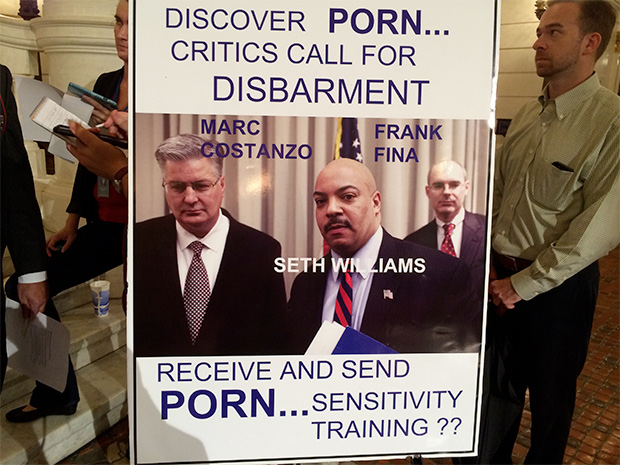 Kane has been indicted by Risa Vetri Ferman, the Republican district attorney for Montgomery County, the location of Philadelphia’s wealthy “Main Line,” for allegedly leaking grand jury sealed emails of two former state prosecutors within the Attorney General’s office in Harrisburg. However, it was The Philadelphia Inquirer which received the leaked emails and reported Kane as the ultimate source. The paper has led the attack against Kane and it has publicly called for her resignation or disbarment. Many informed observers believe that the grand jury leak was staged in a bipartisan operation to unseat Kane because she has garnered the reputation of a political “loose cannon.” When she was elected attorney general in 2012, Kane received more votes than President Obama, who carried the state.

In a statement by Kane read at the rally in her support, the Attorney General said there are two types of evil, the first, “violent destructive acts,” and second, the type when “people stand back” in the face of evil. It is clear that Kane was referring to the nature of the Penn State abuse cover-up and other political misdeeds by both Republican and Democratic office holders in the state.

Kane had fired prosecutors Frank Fina and Mark Costanzo for sending and receiving emails containing pornographic images, some with suggestive images relating to statutory rape and child pornography. WMR has obtained all 396 pages of unredacted emails and most of the images are close up photos of breasts and vaginas. However, among the images was one of a child looking at pornography on a computer screen. Another was of a young girl wearing a tank top bearing the inscription, “Admit it, you’d go to jail for this.” Some of the images sent by Fina were so suggestive, WMR decided not to publish them because they could be considered to fall under the category of borderline child pornography. 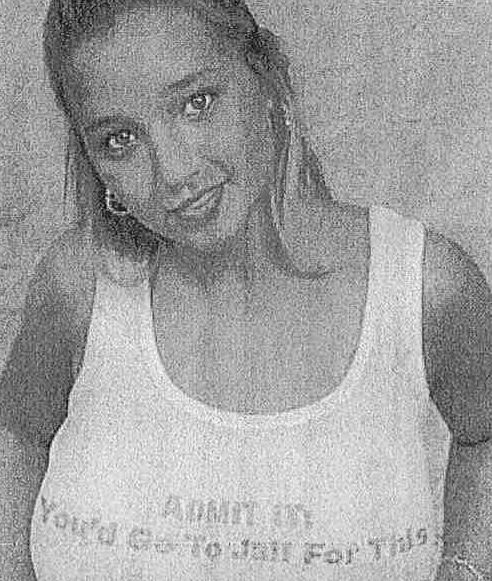 Ferman has made no secret of her desire to either replace Kane as attorney general. However, in order to beef up her credentials, Ferman has announced plans to run for Common Pleas Court judge.

In 2014, Ferman dropped a rape case against Montgomery County GOP chairman Robert Kerns. Kerns was accused of administering a “date rape” drug to a female at a Christmas Party. However, Ferman later said her staff misread a laboratory report, which cleared Kerns of the rape. WMR was told by an informed source that Ferman was present at the Christmas party where the rape was said to have occurred.

Retired Archbishop of Philadelphia Anthony Belavacqua was due to testify against a former aide, Monsignor William Lynn, for covering up for pedophile priests in the archdiocese. Belavacqua, who was 88, and reportedly suffering from cancer and dementia, died at Lankenau Hospital on January 31, 2012, just a few months after Sandusky was indicted on 40 counts of sex crimes against young boys and just before a judge ordered Belavacqua to tesfty at Lynn’s trial. Belavacqua may have suffered from dementia, but informed sources within Philadelphia’s Catholic hierarchy told WMR that Belavacqua was prepared to blow the whistle on Pennsylvania’s tolerance of pedophilia far beyond the Philadelphia archdiocese, which is scheduled to host Pope Francis I later this month.

In addition to Penn State and Sandusky and Paterno, Belavacqua reportedly had the goods on Villanova University, a Catholic institution in Montgomery County that had been the recipient of a number of donations from the late Dupont heir John Dupont, who was found guilty of third-degree murder by reason of insanity to the 1996 shooting death on his estate of wrestler Dave Schultz. Dupont, before being committed to an state mental institution, reportedly preyed on male students, including seminarians, at Villanova. Dupont died in 2010 while in a mental institution.

District Attorney Ferman stated that the actual cause of Belavcqua’s death was undetermined because his body was embalmed before an autopsy could be conducted. There was also the unusual event of Belavacqua’s body being embalmed at 11:30 pm on the day of his death. Ferman said she was unaware that Belavacqua’s body had been released to the funeral home before the coroner had the opportunity to conduct an autopsy. There were rumors of suicide and euthanasia, both sins according to Catholic doctrine. However, the Philadelphia press never mentioned the possibility that the archbishop was murdered.

WMR was told by informed sources that Kane’s probe of the cover-up of Sandusky likely led to other doors being opened to her investigation.

Fina and Costanzo were holdovers from the previous Attorney General reign of Republican Tom Corbett, who was elected governor. It is quite clear that Fina and Costanzo dragged their feet on the state’s investigation of convicted and imprisoned former Penn State football coach Jerry Sandusky at the behest of Corbett who was a close friend of disgraced Penn State football coach Joe Paterno.

After being fired by Kane, Fina and Costanzo were hired by Philadelphia district attorney Seth Williams, the city’s first African-American D.A. but someone who maintains close ties with Republican Party big wigs in the Philadelphia suburban Montgomery and Delaware counties. One source who spoke on a condition of anonymity to WMR stated that Williams is a member of the posh Springfield Country Club where he regularly rubs shoulders with GOP politicians and businessmen, many of whom are also close to Ferman, the Montgomery County district attorney who indicted Kane in an attempt to eject her from office.

When details of their salacious emails surfaced in the media, Williams merely required Fina and Costanzo to attend “sensitivity training,” which was at taxpayers’ expense.

Meanwhile, the state supreme court’s disciplinary board is trying to suspend Kane’s law license in order to drive her from office. The state apparatus, including the D.A. offices of Philadelphia and Montgomery County, the supreme court, and even the Democratic “reform” governor Tom Wolf, fear that a trial will expose those involved with Sandusky, Penn State’s culture of permissiveness concerning underage sexual predatory practices of Sandusky and his Second Mile charity foundation to assist troubled teens. The political “good old boys” network in the state, which includes some women like Ferman and a few female lay leaders within the Roman Catholic Archdiocese of Philadelphia, do not actually want the criminal case against Kane to come to a full trial. Many Pennsylvania politicians are reportedly concerned that they and their close associates will be called to testify about the cover-up of Sandusky’s activities by Corbett as both attorney general and governor, former Democratic governor Ed Rendell, and Republican U.S. Representative and former U.S. Attorney for Eastern Pennsylvania Pat Meehan.

Kane is up against a powerful phalanx of Sandusky and Penn State pedophilia cover-up artists. The Republican judge investigating the alleged leak of grand jury information by Kane, William R. Carpenter, appointed a special prosecutor to probe the leak. That prosecutor is Montgomery County attorney Thomas Carluccio, also a Republican. One of Carpenter’s judicial colleagues, retired Pennsylvania Supreme Court Justice Seamus McCaffery, was accused of sending sexually explicit emails to an employee in the state Attorney General’s office. He resigned from the bench. There are strong indications that Chief Justice Ron Castille, a former Philadelphia district attorney, covered up for McCaffrey. A source told WMR that Castille and Corbett are now retired in Fort Lauderdale, Florida, far from the scene of their improprieties and possible crimes. As many as 30 prosecutors and agents within the Pennsylvania Attorney General’s office, many of them hired by then-Attorney General Corbett, transmitted over 380 pornographic images over the state government’s email system.

On April 15, 2005, the district attorney for Centre County, Pennsylvania, Ray Gricar, disappeared without a trace. Gricar opted not to prosecute Sandusky in 1998 when the first major allegations surfaced concerning the sexual predatory practices of Sandusky. However, Gricar, who served as D.A. since 1986, decided not to run for re-election in 2005. Gricar, like Corbett, was close to Paterno who often invited them to fly on his plane to Penn State games out of state. Informed sources told WMR that Gricar removed his county-issued laptop computer from his office and was prepared to “tell all” about Sandusky, Penn State, Corbett, and the Second Mile Foundation. Although no trace of Gricar was ever found near his car that was parked along the bank of the Susquehanna River in Lewisburg, Pennsylvania, his laptop was found by some local fishermen but the hard drive was found to be missing. A few months later, the hard drive was discovered along the bank of the Susquehanna near the location of where the laptop was found but the damage to the drive was so great, no data could be recovered.

A knowledgeable source told WMR that Gricar was “hit” by the mob, who likely came from Bayonne, New Jersey, the hometown of Paterno. Gricar was an adamant anti-smoker to the degree that he would not even allow someone who had been smoking to enter his D.A.’s office. Yet, when his car was discovered, there were cigarette butts on the floors of the front of the vehicle and in the rear passenger area. The cigarettes are believed to have been a “calling card” of disrespect often left after a mob hit in order to send a message to the victim’s friends and family.

WMR has, in the past, covered the so-called Franklin pedophile scandal centered in Nebraska, the Dennis Hastert/Mark Foley “pagegate” scandal and Hastert’s past as a pedophile high school wrestling coach, and the U.S. State Department diplomat-pedophile scandal in Southeast Asia that involved John Mark Karr. The Pennsylvania pedophile scandal involving state prosecutors who trafficked in computer porn while, at the same time, covering up for Sandusky and his fellow perpetrators, is a major story. Unfortunately, the Pennsylvania newspapers, including The Inquirer, Allentown Morning Call, and Philadelphia Daily News, are all arrayed against Kane and ignoring the smut sent and received by state prosecutors who are now being protected by Philadelphia’s D.A., the state supreme court, and the powers who are trying to replace Pennsylvania’s attorney general with one who will return to the status quo ante of covering up for influential pedophiles and perverts in high office.