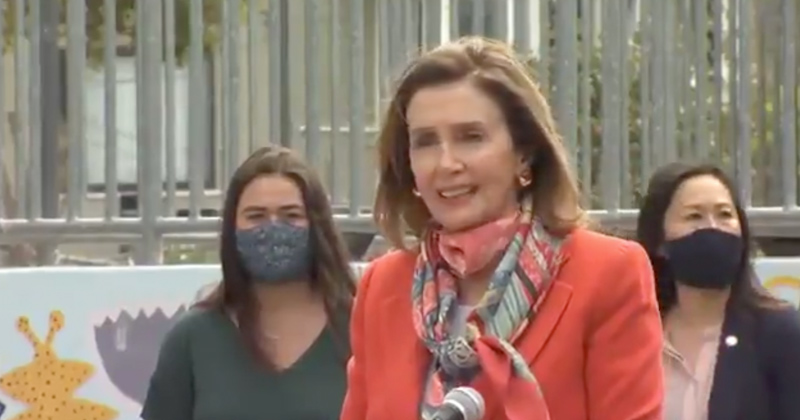 US House Speaker Nancy Pelosi (D-Calif) attacked the San Francisco salon she got busted visiting, claiming they orchestrated a “setup” to make her look bad.

On Wednesday, the California representative blamed her constituents at eSalon for allowing her inside to do her hair, claiming she put her faith in workers to follow local laws, which currently prohibit indoor salon visits.

Far from apologizing for violating COVID restrictions, Pelosi explained to reporters the salon conspired against her, saying, “I think that this salon owes me an apology, for setting me up.”

“It was a setup” pic.twitter.com/cOlsmdq2pk

“I take responsibility for trusting the word of the neighborhood salon that I’ve been to over the years many times and when they said, ‘We’re able to accommodate people one person at a time,’ I trusted that,” the house speaker stated.

On Tuesday, footage distributed by eSalon owner Erica Kious showed Pelosi walking around inside the closed salon during a hair appointment mask-less, enraging many business owners around California who were barely allowed to reopen Tuesday after being shut down for months.

Asked why she had her mask down by a reporter Wednesday, Pelosi responded, “I just had my hair washed. I don’t wear a mask when I’m washing my hair. Do you wear a mask when you’re washing your hair? I always have a mask.’

“It was a slap in the face that she went in, you know, that she feels that she can just go and get her stuff done while no one else can go in, and I can’t work,” Kious said, adding, “We’re supposed to look up to this woman, right? It is just disturbing.”

In a breaking update Wednesday afternoon, supporters of Kious set up a GoFundMe fundraiser claiming she would be moving the salon to a new location after receiving threats from Pelosi supporters.

In a breaking update Wednesday afternoon, supporters of Kious set up a GoFundMe fundraiser claiming she would be moving the salon to a new location after receiving “outrage and threats” from Pelosi supporters.

The owner of eSalon, Erica Kious who’s a single mother of two, is now being forced to shut down & relocate her business & family due to outrage & threats she is receiving after speaking out about Nancy Pelosi’s visit to her salon.