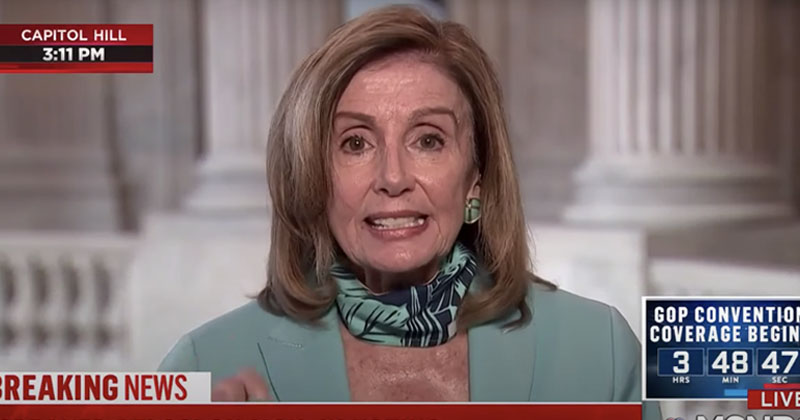 House Speaker Nancy Pelosi (D) accused President Trump and Republicans of being “enemies of the state” for making cost-cutting changes to the United States Postal Service ahead of the presidential election.

“We take an oath to protect and defend the Constitution from all enemies foreign and domestic and sadly the domestic enemies to our voting system and aren’t honoring our Constitution are right at 1600 Pennsylvania Avenue with their allies in the Congress of the United States,” Pelosi said Monday on MSNBC.

“It’s really actually shameful, enemies of the state,” Pelosi said, adding that the Trump Admin is “diminishing the role of the postal system.”

The Democrats’ new grievances about the USPS come after the Postmaster General Louis DeJoy made structural changes to the postal service, like removing hundreds of mail-sorting machines, eliminating “excessive” mail trips, and cutting back on overtime pay to postal workers.

“There are a lot of things that are impacting our service, and this is one of them on the front end…we should have cleared it up quicker,” DeJoy told the House oversight committee on Monday. “It will recover quite rapidly going forward.”

At the same time, Democrats are desperately trying to implement universal mail-in voting, which President Trump derided during the Republican National Convention on Monday.

“Now they’re doing something that in a certain way is more dangerous, because it’s more effective. They spied on my campaign, you know what they found? Nothing. But this is big stuff. This is stealing millions of votes, and it’s going to be very hard. The only way they can take this election away from us is this is a rigged election.”

Obama and Biden spied on the Trump campaign in 2016, and they got caught. “Spygate!” shouted an audience member. “Drain the swamp!”

Now the Democrats are doing something more dangerous: trying to steal the election with universal mail-in voting, which lends itself to fraud. pic.twitter.com/pUzcBghuHF

Trump spoke at the RNC in Charlotte to issue a dire warning that the election is in peril.