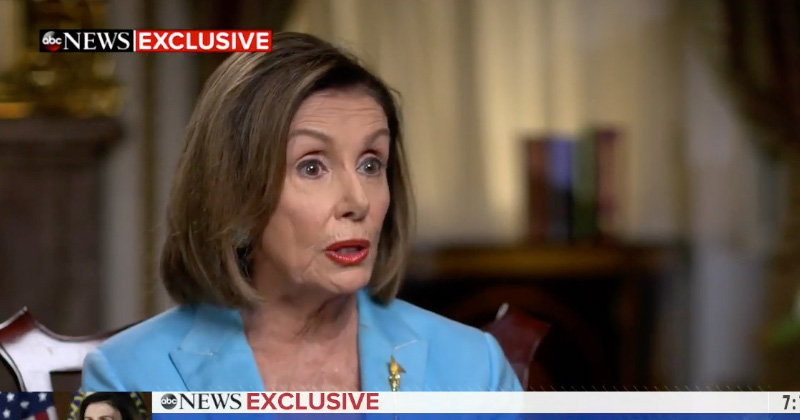 “I want the American people to know what that phone call was about. I want them to hear it. So yeah, it’s fair, it’s sad but it’s using the president’s own words,” Pelosi stated.

The House Speaker pushed back when Stephanopoulos pointed out that the version of Trump’s phone call Schiff presented to Congress was actually not verbatim.

“He did not make it up,” she stammered.

Pelosi went on to admit there was as yet no “point of no return” in pursuing impeachment and that a vote was not necessarily “inevitable,” essentially admitting there is no evidence of wrongdoing.

“I don’t think so,” Pelosi said. “No, we just go forward and follow the facts. There are some people who say ‘why are you calling for an inquiry? You should just call to impeach.’ I don’t think that would be fair and it isn’t worthy of the Constitution.”

Despite the prospect of impeachment being tabled for now, Pelosi went on to reveal the tactic was basically an attempt to keep Trump from winning re-election.

“The re-election of Donald Trump would do irreparable damage to the United States. We have some serious repair and healing to do in our country for what he’s done so far. I’m not sure two terms might be irreparable [sic],” she said.

President Trump took Schiff to task over his parody of the call on Wednesday, calling on the California Democrat to resign in disgrace.

TRUMP on Adam Schiff: "They should look at him for treason." pic.twitter.com/AwttLmIHmo

President Trump is fighting for Humanity against a den of democrat vipers hell bent on undoing the election they lost in 2016.