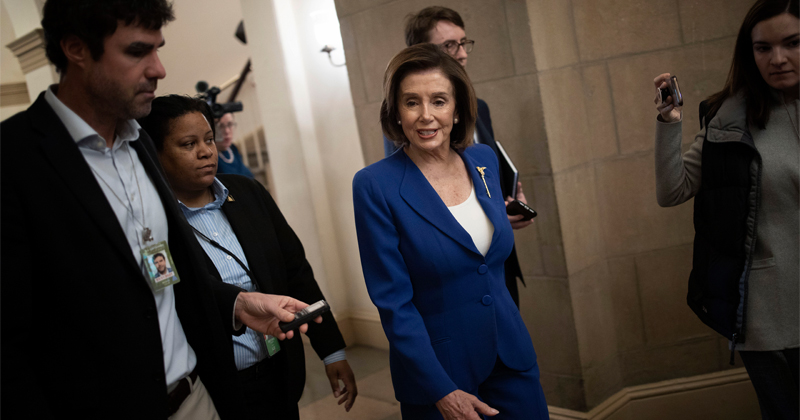 Pelosi in her weekly presser calls McConnell’s UC request for $250B for loans “a stunt” ignoring a “good faith offer” to negotiate and figure out what amount is needed where.
“Let’s see the data"

Senate Democrats blocked an urgent small business relief package on Thursday after their demands for double the funding and an increased scope went unheard by GOP leadership, according to the Washington Examiner.

Majority Leader Mitch McConnell, responding to a request from Treasury Secretary Steven Mnuchin, hoped to quickly pass a bill to replenish a small business aid program with an infusion of $250 billion in federal funding.

But Democrats blocked the Kentucky Republican’s unanimous consent request to pass the measure out of the Senate and proposed their own $500 billion measure. –Washington Examiner

“The Democratic leadership has suggested they may hold Americans’ paychecks hostage unless we pass another sweeping bill that spends a half a trillion dollars doubling down on a number of parts of the Cares act, including parts that haven’t even started to work yet. The country cannot afford more wrangling or political maneuvering. There is zero chance the sprawling proposal Democrats have gestured toward could pass either chamber by unanimous consent this week. No chance,” said McConnell in a statement.

According to Democrats, the GOP bill fell short by not providing adequate funding for small business owned by ‘groups that have traditionally had difficulty obtaining loans,’ as well as hospitals, and state and local governments.

The Democratic bill would set aside half of the small business spending to smaller community based lenders and credit unions and minority depository institutions.

Cardin called the Republican bill “a political stunt” that he said “will not address the immediate needs of small businesses.”

The battle over the small business package came after new unemployment figures showed 6.6 million people filed for unemployment in the United States due to the coronavirus outbreak. –Washington Examiner

The $250 billion GOP plan, requested by Mnuchin, was meant to replenish the Paycheck Protection Program which was signed into law by President Trujmp on March 28, and supplied with $350 billion in quickly evaporating funds according to the Treasury Secretary. It allows small business to take out forgivable loans as long as they keep the majority of their staff employed.

According to McConnell, 30% of the initial funding for the program was used up in the first few days.

“We need more funding and we need it fast,” he said.

David Knight is joined by Dr. Sherri Tenpenny to discuss the hidden globalist agenda of Bill Gates and what you can do to prepare.