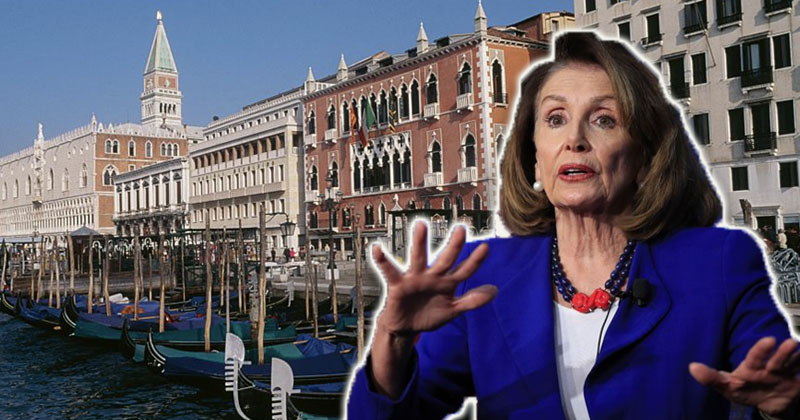 House Speaker Nancy Pelosi had some choice words Saturday for President Trump over his remarks about Baltimore’s squalid conditions under the failed leadership of Rep. Elijah Cummings (D-Md.) — from a luxury hotel in Venice.

“@RepCummings is a champion in the Congress and the country for civil rights and economic justice, a beloved leader in Baltimore, and deeply valued colleague,” Pelosi tweeted Saturday. “We all reject racist attacks against him and support his steadfast leadership. #ElijahCummingsIsAPatriot.”

.@RepCummings is a champion in the Congress and the country for civil rights and economic justice, a beloved leader in Baltimore, and deeply valued colleague. We all reject racist attacks against him and support his steadfast leadership. #ElijahCummingsIsAPatriot https://t.co/2LG8AuQrHh

Notably, Politico pointed out that Pelosi had been spotted at a 5-star restaurant at Hotel Danieli, in Venice, Italy, that same day.

Pelosi would never spend a second in the declining parts of Baltimore any more than Cummings would, but that won’t stop them from lecturing Trump about how racist he is for daring to point out the decrepit conditions of the middle-class while the Democrat elite bask in luxury.

As we reported, videos from Cummings’ own district shows an epidemic of poverty, filth, and squalor plaguing the once-vibrant city of Baltimore, consistent with Trump’s criticisms.

But Democrats won’t let a pesky thing like facts get in the way of their destroy-Trump campaign heading into 2020.

Democrat-controlled cities with crumbling infrastructures want to expand their campaign of desolation while removing any trace of reference to God or true moral authority.