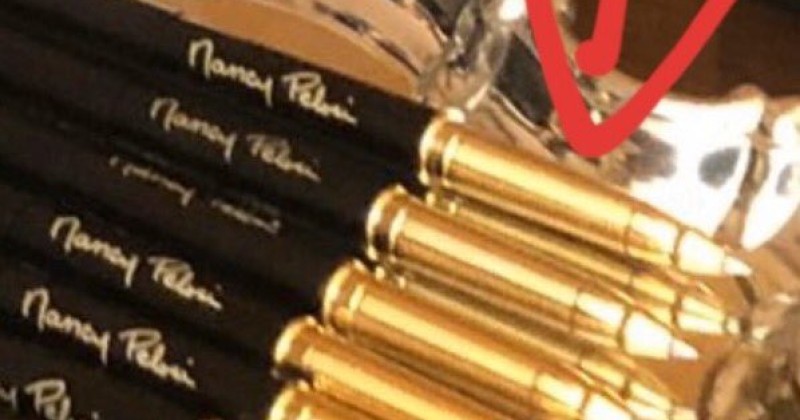 Nancy Pelosi signed the articles of impeachment against President Donald Trump with pens that looked like bullets as she and other Democrats laughed.

“These are the pens Nancy Pelosi used to sign the articles & she gave them out to colleagues. Wow they look like bullet cases,” commented Fox Business host Maria Bartiromo.

These are the pens Nancy pelosi used to sign the articles & she gave them out to colleagues. Wow they look like bullet cases. Join us now. ⁦@MorningsMaria⁩ ⁦@FoxBusiness⁩ pic.twitter.com/muD9bfUnGK

“Holy shit this is fucking insane What is wrong with these people?” asked journalist Tim Pool.

After the signing, CNN reports that Pelosi, “handed out multiple pens to the impeachment managers.”

Dana Bash noted that pens are normally handed out during “moments on celebration” or when a landmark piece of legislation is being passed.

“It was unusual to see that kind of ceremony, handing out the pens, smiling for pictures, in this kind of situation when the House Speaker has bent over backwards to say publicly and privately that this is somber, this is not a time for a celebration,” said Bash.

CNN’s senior political reporter Nia-Malika Henderson also called the sight “jarring” and “off message for someone who has tried to set a serious tone.”