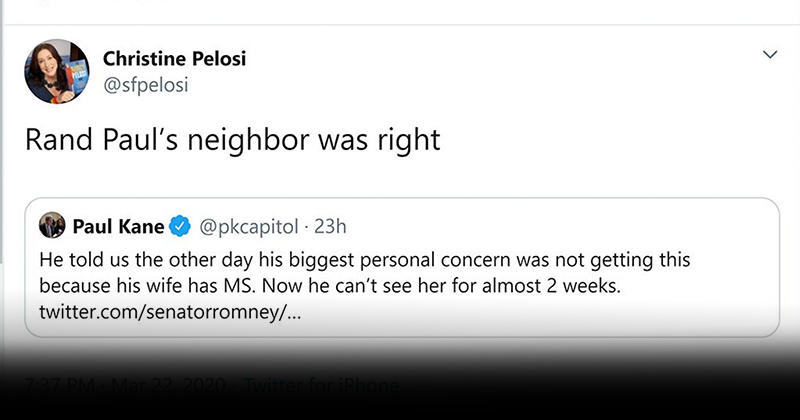 Following the spread of fake news that Rand Paul has infected the entire Senate with the coronavirus, Nancy Pelosi’s daughter expressed support for violent assault on the Senator, tweeting that ‘Rand Paul’s neighbor was right’.

Leave it to Christine Pelosi @sfpelosi (Nancy Pelosi's adult daughter) to have the most disgusting take of the day on twitter dot com.https://t.co/kGN4It6Isg pic.twitter.com/qXC8xlsVdu

Christine Pelosi was referring to a physical assault on Paul by his Democrat neighbor, Rene Boucher, in November 2017 at his home in Bowling Green, Kentucky.

Boucher, was sentenced to 30 days in prison for assault.

The attack left the Senator with severe injuries, including lung damage, which is exactly why Paul demanded that he have a test for coronavirus, knowing he is in an at risk category.

Pelosi’s daughter was merely repeating a heinous meme that has been spread by leftists for years now.

The backlash against Pelosi’s kid was swift:

Are we not doing that dangerous rhetoric thing anymore? Journalists passed around some kook thing Paul's dad wrote yesterday. Here's the daughter of the Speaker of the House endorsing assault on Rand Paul. https://t.co/fAmlupRb92

Will @Twitter and @jack find it ok to approve of a cowardly blindside felony attack by a crazed liberal neighbor? The world watches and waits to see if these “kind and tolerant” comments will be consequenced. https://t.co/NGYggJ76s7

This is sick & twisted. Rand has contracted coronavirus; in 2017, in a violent criminal attack, he suffered 6 broken ribs, pneumonia & had part of his lung removed—all of which puts him at much greater risk from this deadly virus—and you’re siding w/ the attacker? #LoveEachOther https://t.co/YiE7wGW2UD

You should probably take anything about "love" out of your bio.

This is beyond evil.

Whoah… this is kind of sickening

Meanwhile, the leftist media has acted equally as vile, with talking heads suggesting that it is ‘difficult’ to hope that Senator Paul will recover:

“I think everybody hopes he’s okay. I think, not wishing anyone to be sick or to be exposed is a universal sentiment, but I wonder if that’s just made more difficult.”  said MSNBC talking head Nicolle Wallace.

In a statement, Rand Paul said “I believed my risk factor for exposure to the virus to be similar to that of my colleagues, especially since multiple congressional staffers on the Hill had already tested positive weeks ago.”

“The nature of COVID-19 put me – and us all – in a Catch-22 situation. I didn’t fit the criteria for testing or quarantine. I had no symptoms and no specific encounter with a COVID-19 positive person. I had, however, traveled extensively in the U.S. and was required to continue doing so to vote in the Senate. That, together with the fact that I have a compromised lung, led me to seek testing. Despite my positive test result, I remain asymptomatic for COVID-19,” Paul added.

The Senator directly addressed those criticising him for not self isolating sooner.

“For those who want to criticize me for lack of quarantine, realize that if the rules on testing had been followed to a tee, I would never have been tested and would still be walking around the halls of the Capitol. The current guidelines would not have called for me to get tested nor quarantined. It was my extra precaution, out of concern for my damaged lung, that led me to get tested,” Paul said.

“Perhaps it is too much to ask that we simply have compassion for our fellow Americans who are sick or fearful of becoming so,” the Senator further urged.