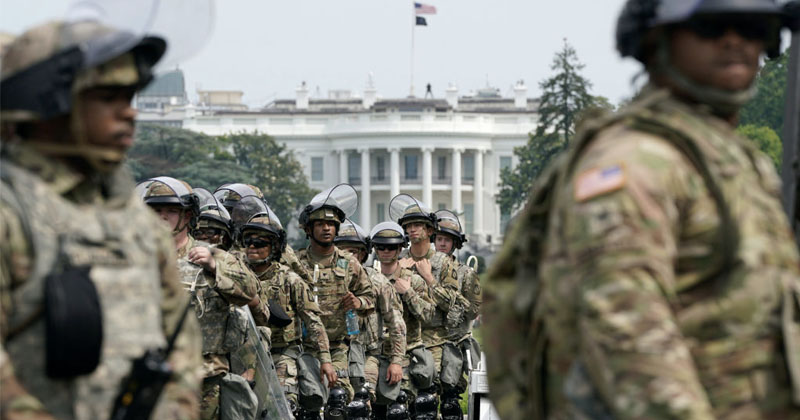 National Guardsmen deployed to Washington D.C. have been ordered not to use firearms or ammunition by Defense Secretary Mark Esper – who also ordered home active-duty troops that the Trump administration requested in recent days, according to The Washington Post.

The move comes as activists gear up for a massive demonstration in the nation’s capitol on Saturday in the ongoing protests over the death of George Floyd – a black man who died after a white police officer in Minneapolis knelt on his neck for over eight minutes. An estimated 100,000 – 200,000 protesters are expected on Washington on Saturday.

Members of the National Guard arrive on the ellipse near the White House ahead of today’s Black Lives Matter protest. pic.twitter.com/tKGWaFgBNs

According to Fox News’ Lucas Tomlinson, 43,000 National Guard troops have been deployed across 34 states and Washington D.C. to assist police with protests – a doubling in just four days.

And if violent elements within the protests begin shooting at National Guardsmen, they will be unable to shoot back.

Initially, a small group of guardsmen deployed in the city had been carrying guns while standing outside monuments, but the bulk of the forces, such as those working with federal park police at Lafayette Square in front of the White House, didn’t carry firearms out of caution. Now, all of the roughly 5,000 guardsmen deployed to Washington from the District of Columbia and 11 states have been told not to use weaponry or ammunition.

At a news conference Friday, Army Secretary Ryan McCarthy said that some guardsmen in the District had been carrying arms on Monday, but noted that they did not have magazines of ammunition in their firearms. Beginning Tuesday, the Trump administration de-escalated further, he said, by removing firearms from the equation altogether. –The Washington Post

“It was clear that there were enough federal law enforcement that had descended on the city, and that would be their principal responsibility,” said McCarthy.

As the Post notes, the D.C. National Guard is under the president’s control, who delegated control to McCarthy. Mayor Muriel Bowser (D) requested that the Trump administration dploy the guard – initially for the response to the coronavirus pandemic, however she has since criticized Trump’s response in the city which critics have called an overreaction – after he called guardsmen from other states and active-duty forces to sites outside the capital for other operations. The enhanced security will include undercover street patrols by federal law enforcement officials from the Bureau of Prisons and Customs and Border Protection.

The situation grew particularly tense after two helicopters from the D.C. Guard began hovering over protesters in the streets, blasting them with gusty rotor wash from the aircraft. All helicopter flight operations in the D.C. Guard have been suspended until an investigation into the incident ordered by Esper is complete, said D.C. Guard spokeswoman Air Force Lt. Col. Brooke Davis.

Trump’s insistence on a militarized response in the nation’s capital has led to strains with Esper, a West Point graduate and former Army officer who took over as defense secretary last year. Esper announced publicly Wednesday that he wasn’t in favor of using the Insurrection Act to deploy active-duty troops, even as the president threatened to invoke it. –The Washington Post

Esper’s decision to send home some of the 1,600 active-duty troops amassed in DC was overruled by Trump following a contentious meeting – however the administration announced that some of the troops would indeed be leaving.

On Friday, McCarthy announced at the Pentagon that all active-duty soldiers would return to their bases – the last of which being the 3rd US Infantry Regiment – known as the “Old Guard” based out of Fort Myer, VA.