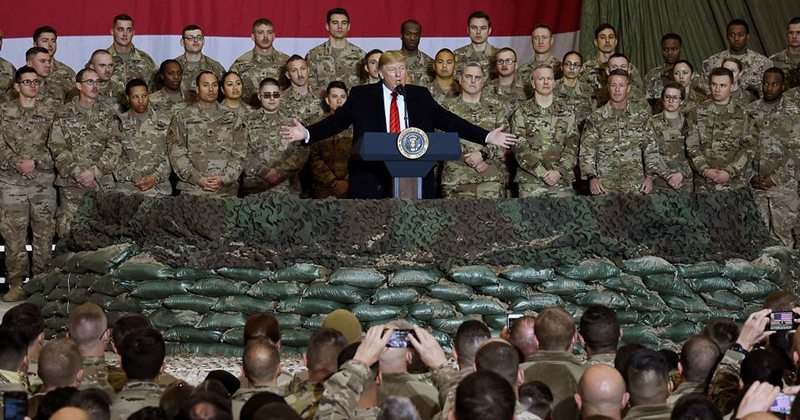 The Pentagon has refuted reports that the Trump administration is mulling whether to beef up US forces in the Middle East with up to 14,000 troops, which would have doubled the number of soldiers deployed in the region since May.

The Wall Street Journal reported Wednesday that the White House was studying the option of sending the 14,000 troops in addition to scores of warships and other hardware to the Middle East under the pretext of countering an “Iranian threat.”

Citing US officials, the WSJ report said Trump was expected to make up his mind on the matter by the end of this month, and that he still could settle for a smaller number of troops. The move could have potentially inflamed tensions between Washington and Tehran, who saw a massive US build-up at its own doorstep with 14,000 US troops having been deployed to the region between May and October.

Shortly after the report came out, however, it was shot down by the Pentagon’s spokesperson Alyssa Farah.

“This reporting by the @WSJ is wrong. The U.S. is not sending 14,000 troops to the Middle East to confront Iran,” Farah tweeted, throwing cold water on the claim.

This reporting by the @WSJ is wrong. The U.S. is not sending 14,000 troops to the Middle East to confront Iran. https://t.co/zxswP6sf3B

With many on Twitter pointing out that the original report did not say that the deployment was a foregone conclusion, but that Trump was still weighing the option, Farah later clarified that the US was not even “considering” sending thousands of additional troops to the area.

Alex Jones breaks down the anti-human endgame of the AI takeover and what Humanity can do to fight back.
By the way, save money while improving your daily life by ordering the Change Your Life Trifecta Pack during our Cyber Week sales!

However, it remains a matter of speculation whether the Trump administration could still go for a build-up, albeit possibly on a smaller scale.

is it the figure you take exception to? or the reason? how about you hold a press conference instead of tweeting.

Tensions between Iran and the US have soared since Trump withdrew from America’s end of a landmark nuclear accord signed with Teheran in 2015, reintroducing punitive measures relaxed under the deal and slapping the country with a fresh batch of crippling economic sanctions – dubbing it a “maximum pressure” campaign aimed at reducing Iran’s energy imports to zero. The relationship, already strained, took another turn for the worse following the September 14 attack on Saudi oil infrastructure, claimed by Yemen’s Houthi rebels, but blamed by Washington on Teheran. The US has since been flexing its military muscles with its eyes on Iranian shores, deploying a carrier strike group and a bomber task force to the region earlier this year, as well as reportedly carrying out several cyberwarfare operations against Iran.

Despite Trump’s insistence that he wants to get the US out of all “endless wars,” there have been recurrent rumors that Washington is ready to send thousands of troops to the Middle East to fend off the “Iranian threat” at the behest of its Israeli ally.


Back in October, US Secretary of State Mike Pompeo said that Israel had the “fundamental” right to violate international borders while hunting down any “Iranian positions” across the region, vowing to throw full US support behind the endeavor.